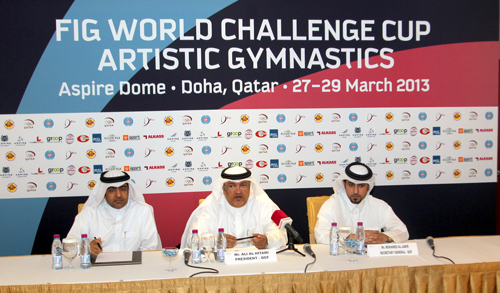 Doha (QAT) AGU Office; March 22, 2013: DOHA OVER 150 top gymnasts from 36 countries have confirmed their participation at the Artistic Gymnastics World Challenge Cup with 12 Asian Countries such as: CHN –  HKG – IRQ – JOR – JPN – KAZ – KUW – MAS – PRK – QAT – SIN and VIE, which will be held at the Aspire Dome, in Doha, from March 27, Qatar Gymnastics Federation (QGF) President Ali al Hitmi has said.
Addressing a press conference ahead of the competition on Monday, the QGF head informed that the $50,000 prize money event, which is in its sixth edition, is the second among only five such events on the International Federation of Gymnastics (IFG) calendar this year.
He said that the 2013 World Series has been rechristened as the ‘FIG World Challenge Cup’ from ‘FIG World Cup’. He said the proposal to change the name was made by the QGF in Lausanne, Switzerland, recently.
Hitmi said that the name change was necessary in order to make it more glamourous and marketable. “By changing the name, the event will acquire a better appeal in terms of sponsorship values,” Hitmi said.
Speaking about the importance of the three-day competition, QGF Technical Director Anis Saoud noted: “The World Challenge Series will, for the first time in history of the sport, serve as qualifiers for the Olympics Games.
He said: “The participating gymnasts will garner points according to the finish they get. After each event we will have a World Ranking lists for each apparatus – six for men and four for women. The competitions feature qualifications and finals. The best eight gymnasts in each apparatus will qualify for the final rounds,” he said.
He also added that the new floor exercise routine model would be tested at the Doha event. ‘The success of the floor exercise would serve as a spring board for its eventual implementation at the world championship, scheduled in Antwerp, Belgium, from September 30 to October 6 later this year.
Hitmi said that the magnificence of the Aspire Dome, which is the world’s largest indoors sports facility, and the superb organisation of the event had prompted the IFG to launch the floor exercise experiment in Doha.
The top gymnasts who are expected here include two gold medallists from the London Olympic Games – Krisztian Berki of Hungary and Brazil’s Arthur Zanneti.
Former world champion Yuri Van Gelder of the Netherlands, Lareesa Andreea of Romania and Australia’s Prashanth Sellathurai will also be present in different events.
Qatar will be represented by national team gymnasts Mahmoud Saadi, Nasser al Hamad, Malik al Yahri and Ahmed Dayyani from the men’s team. The women’s team will field Shaden Wohdan, a double gold medallist at the last Arab Games, and Jazi al Habshi.
The press conference also featured a series of sponsorship signing agreements between the QGF and a host of sponsors – Aspire, Dana Waters, The Look Company, Holiday Villa Hotel. Qsport is partnering with the QGF for the sponsorship of the fan zone at the event.
London Olympics Gold medallists Krisztian Berki of Hungary and Arthur Zanneti of Brazil are some of the star attractions for the FIG World Challenge Cup Artistic Gymnastics to be held here at the Aspire Dome from March 27-29.

Apart from Berki and Zanneti, other top gymnasts who figure in the list are former World Champion Yuri Van Gelder of Netherlands and London Olympics
You can follow the event on the official website: www.dohagym.com and facebook page: facebook.com/dohagym 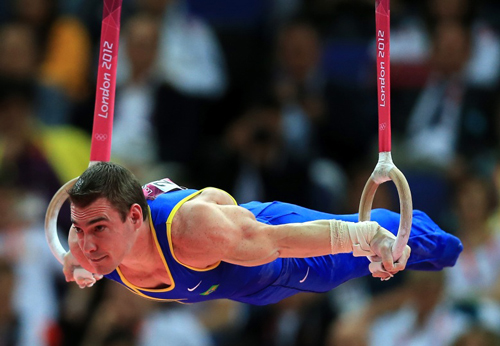