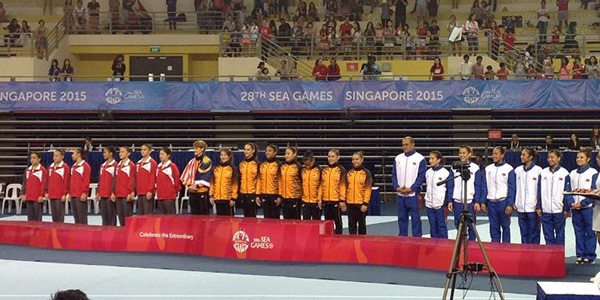 Doha (QAT) AGU Office June 08, 2015: MAG Team Final June 6, 2015
For too long the Singapore men’s gymnastics team have lived in the shadow of their female colleagues.While the latter are widely regarded as one of the region’s best gymnastics teams, the men have found success hard to come by. But at the Bishan Sports Hall yesterday, the men finally proved that they too can be relied on to bring in the medals.
The team of Gabriel Gan, Timothy Tay, Muhammad Jufrie Aizat, Terry Tay, Gregory Gan and Hoe Wah Toon became the first Singapore men’s gymnastics team to clinch a medal at the SEA Games, taking bronze behind Thailand and winners Vietnam. –
It would have been a more brilliant achievement had they closed a 0.05-point gap with the Thais, who totaled 318.150 points over six challenges – floor, pommel horse, rings, vault, parallel bars and horizontal bar. But the home side were still happy with their performance as their points total was their highest so far.”It was a big breakthrough for all of us,” said Tay. “All the sacrifices we made feel worthwhile today. “But the bigger stars were Vietnam, who not only retained their artistic gymnastics men’s team title but also gave a world-class showing of 344.700 points. The score would have placed them among the top 12 in the Olympics. Said Vietnam’s top gymnast on the day Pham Phuoc Hung, 26, who had the best all-around score of 86.900 points: “I’m very happy with the win because we’ve never achieved such high scores before. “Vietnam, who dominated with 12 golds the last time gymnastics featured at a SEA Games in 2011, are again expected to rule the sport. But Singapore are also keen to add to the bronze. Hoe, a vault medal hopeful, finished eighth and fifth for floor and vault respectively in the team event yesterday and will be competing in the two individual event finals on Tuesday and Wednesday. For 2011 men’s apparatus silver medallist Gabriel Gan, who finished fourth and seventh for pommel horse and all-around yesterday, he is expecting a medal from the pommel horse individual event on Tuesday. Said Hoe: “On the day of the finals, it really depends on who performs better. “Everyone has a fair chance on that day.”
By: Lok Weng Seng

WAG Team Final June 7, 2015
Malaysia pip Singapore for women’s artistic gymnastics gold
SINGAPORE – Malaysia have won the SEA Games women’s artistic gymnastics team event at Bishan Stadium on Sunday, breaking Singapore’s stranglehold on the title from 2005.
They finished with a total of 206.200 points to overtake Singapore’s overall score of 202.500 and the Philippines, who scored 191.400 to finish third.
Singapore were champions in 2005, 2007 and 2011, with gymnastics omitted from previous editions of the Games in 2009 and 2013.
Led by 2013 Asean school championships gold medallist Janessa Dai, the hosts were ahead in the standings as late as the third rotation, leading Malaysia by two points. However, a strong final floor routine by Malaysia earned them the gold.
Janessa, 16, led a team of debutantes and despite having to settle for silver, still believes it was a good first experience of the Games for she and her teammates.
“We are certainly very proud to have got the silver. We did our best,” she said.
By Low Jay Sen
Jubilation and tears of joy engulfed the women’s artistic gymnastics team as they delivered on their promise to win the gold at the Singapore SEA Games.
Farah Ann Abdul Hadi, Tracie Ang, Tan Ing Yueh, Lavinia Raymund Jayadev, Siti Nur Bahirah Ahmad and Nur Eli Ellina Azmi emerged victorious after compiling 206.200 points at the Bishan Sports Hall.
Singapore took the silver with a 202.500 total while the Philippines amassed 191.400 points for the bronze.
“We did it for our team and our coach Nataliya (Sinkova). It’s her birthday today and we wanted to celebrate it with something special,” said captain Farah.
“I’m just so happy. This is for our coach and my dad (who is the team manager). This is the best team ever and we did it. We brought back the gold,” added Farah, holding back her tears.
Fifteen-year-old Lavinia, who made her debut for Malaysia, said: “This is an amazing team to be part of. Thank you to the coach for including me in the team.”
The last time Malaysia emerged champions was in 2001 in Kuala Lumpur. Sinkova, a Ukrainian, was also the coach then.
“We weren’t talking to each other at all during the competition. It was very tense. We weren’t in contention at the start, but the girls really wanted the gold. To win is a dream come true. This is my dream team,” said Sinkova, who turned 49 on Sunday.
The 21-year-old Farah put on a stellar display to collect 53.250 points to top the individual all-around qualification round. Ing Yueh was the second best Malaysian performer with a 51.400 total. Both have qualified for the individual all-around finals on Monday.
Farah has also qualified for all the four apparatus finals while the 20-year-old Ing Yueh will feature in three finals – floor exercise, vault and uneven bars.
The vault and uneven bars finals will be held on Tuesday while the floor exercise and balance beam finals will take place on Wednesday.
Can Malaysia pull off a bagful of golds?
Sinkova cheekily replied: “It’s a secret. They are my angels, and I trust them.”
By: ashreena pillai

About SEA Games 2015
The Southeast Asian Games will once again return to Singapore in 2015, after a 22-year long hiatus. Awarded the bid by the Southeast Asian Games Federation (SEAGF) in November 2011, the 28th SEA Games will be held from June 5 – 16, 2015.
Previously hosting the Games in 1973, 1983 and 1993, Singapore’s fourth time hosting the games is especially significant to the republic as it celebrates its 50th year of independence in 2015. This presents Singapore with the perfect opportunity to reinforce regional peace and friendship with its regional neighbours.
The Singapore SEA Games Organising Committee (SINGSOC) believes the mid-year dates will provide ample opportunities for everyone to be part of Games, not only sports enthusiasts. The 28th SEA Games looks set to be a 12-day fiesta.
36 sports and 402 events will feature in the 28th SEA Games Singapore 2015. The sports are aquatics (swimming, synchronised swimming, diving, waterpolo), archery, athletics, badminton, basketball, billiards & snooker, bowling, boxing, canoeing, cycling, equestrian, fencing, floorball, football, golf, gymnastics, hockey, judo, netball, petanque, rowing, rugby 7s, sailing, sepak takraw, shooting, silat, softball, squash, table tennis, taekwondo, tennis, dragon boat, triathlon, volleyball, wakeboard & waterski, and wushu.