3 FIG International Judges course in Syria at the same time 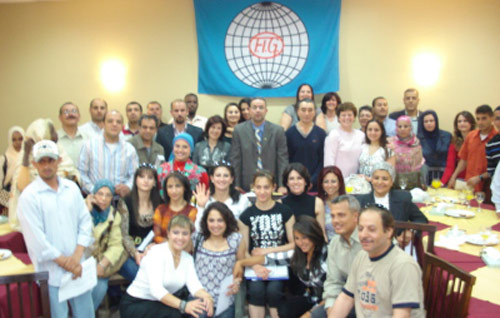 The Syrian Gymnastics Federation recently organised its very first International Judges’ Course for Rhythmic Gymnastics in Damascus (SYR), April 30 – May 5, 2009. But that’s not to say they’re not seasoned organisers; parallel to the RG course the federation hosted judges’ courses for both Men’s and Women’s Artistic Gymnastics. All three courses were held at the facilities provided by the Syrian Olympic Committee, where each conference hall boasts a 30 person capacity.
An opening ceremony was held on April 30 at the Syrian Olympic Academy for more than 60 participants from 11 countries. Judges from Egypt, Iraq, Iran, Kuwait, Qatar, Jordan, Lebanon, Libya, Saudi Arabia, Yemen and Syria took part in the courses.
The facilities were well-equipped making it easy for FIG Experts to ensure excellent practical and theoretical presentations.
Newly elected to the FIG Men’s Artistic Gymnastics Technical Committee, Edouard Iarov (CAN) led the MAG Judges’ Course, at the end of which 21 of a total of 30 course participants took the exam.
With the exception of one judge, those who took the WAG course exam passed with flying colours. The course was led by FIG WTC Vice President Donatella Sacchi (ITA).
Expert and member of the FIG Rhythmic Gymnastics TC Noha Abou Shabana (EGY) was pleased to announce that all 12 course participants for Rhythmic Gymnastics successfully passed the exams.
Course results were announced by the FIG Experts at a closing ceremony given by the Syrian Gymnastics Federation at the Syrian Academy on May 5. A culminating banquet topped things off in Damascus Old Town.
The FIG Experts expressed their special thanks to the Syrian Gymnastics Federation and Mr M. Youssef Al-Tabbaa, President of the federation and FIG Council Member, for their hospitality and the flawless organisation of all three courses.

3 FIG International Judges course in Syria at the same time