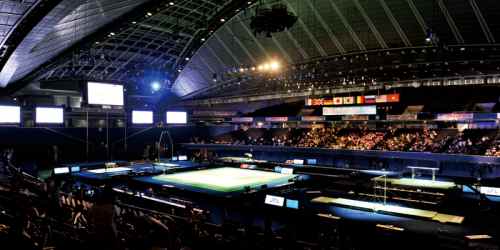 Doha (QAT) AGU Office, October 2, 2011: With only five days to go to the 43rd Artistic Gymnastics World Championships the elite of the international gymnastics world began their training sessions at Yoyogi National Stadium and the Kasumigaoka Gymnasium after reaching Tokyo (JPN) in the past few days.
This event, the most important elite gymnastics event in every non-Olympic year, returns to Japan for the first time since it was first staged there in 1995 when Sabae hosted the 31st edition. There is a qualification round that determines who goes through to the Team, All-around and Apparatus Finals, when the 2011 World Champions and medallists for both men and women will be determined.
The latest update to the entry list features a total of 532 competitors (288 men and 244 women) from 80 different countries. There are 24 teams in both the men’s and the women’s competition, all of whom qualified at the 2010 World Championships in Rotterdam (NED).
The competition will be fierce, especially since the team events in Tokyo determine participation for the 2012 Olympic Games, with the top eight qualifying directly for London and those finishing in 9-16 going through to the Olympic test event in January that serves as a second Olympic qualifier. In addition, all medallists in the individual apparatus competitions in Tokyo will book their tickets for London.
The Tokyo Metropolitan Gymnasium, the venue for these championships, was also used as the venue for gymnastics events at the 1964 Summer Olympics, when Yukio Endo (JPN) won the Men’s Individual All-around and the Japanese men prevailed in the Team competition. It goes without saying that the local fans are eager to see a repetition of this success this year, with reigning World Champion Kohei Uchimura leading a strong Japanese men’s squad.
With four days of podium training getting under way tomorrow in the Tokyo Metropolitan Gymnasium, qualifying rounds are scheduled for October 7–10, followed by the Team Finals on October 11 (women) and 12 (men), the Individual All-around Finals on October 13 (women) and 14 (men) and the Apparatus Finals on October 23 and 24.
The detailed schedule as well as all event-related information including news, press coverage, participant lists and results can be found at http://tokyo2011.fig-gymnastics.com
By FIG

Orientation Meeting
On behalf of FIG President Prof. Bruno Grandi, who is expected in Tokyo on October 6, FIG Vice-President Dr. Michel Léglise (FRA) delivered a message of welcome to representatives of the 80 federations participating in the 43rd Artistic Gymnastics World Championships at today’s orientation meeting.
Léglise recalled the devastating earthquake and tsunami that hit north-eastern Japan on March 11 this year, and he invited the meeting’s attendees to observe a minute’s silence in order to demonstrate empathy and support for the victims of this natural disaster. He then thanked the delegates for their participation and the Organising Committee for their tremendous work in preparing this event, and said he was looking forward to a successful tournament, wishing everyone good luck.
Mitsuo Tsukahara (JPN), Vice-President of the Japan Gymnastic Association (JGA), cordially welcomed the delegates to Japan and expressed his gratitude for all the messages of sympathy that the JGA had received since the earthquake. He promised the JGA would stand united and do its best in hosting these championships, particularly in providing ideal conditions for the gymnasts.
The President of the Local Organising Committee, Morinari Watanabe (JPN), took the audience through the organisational details, before Dr. Léglise issued a reminder that doping controls can take place at any time during the event. He also informed the delegates about a Medical Symposium aimed at medical personnel, to be held on October 16.
Adrian Stoica (ROU) and Nellie Kim (BLR), FIG Technical Committee Presidents for Men’s and Women’s Artist Gymnastics respectively, offered warm words of welcome and wished the best of luck to all participants, while FIG staff members gave an update on media activities during the event. A record 530 media representatives are expected to cover these championships, which will be televised in more than 100 territories. Host broadcaster Fuji TV will use the spidercam technology, first introduced to gymnastics at the 2010 World Championships in Rotterdam (NED), and will produce high-definition images of the competitions.
Watanabe closed the meeting by wishing all gymnasts good luck in their competitions, and said that he hoped the event would be enjoyable for everyone involved.