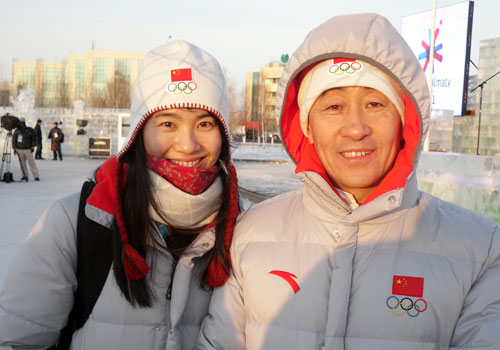 Astana, Kazakhstan AGU Office 02/02/2011: Chinese delegation head Xiao Tian believes the biggest threat to his team at the 7th Asian Winter Games in Astana and Almaty comes from host country Kazakhstan. Speaking after the team welcome ceremony for China at Ice Town Astana on Saturday morning, the Chef de Mission and Vice President of the Chinese Olympic Committee said he expected Kazakhstan to finish on top of the medals table at the end of the Games on February 6.
“We estimate that Kazakhstan will win the most gold medals,” he said.
“As the host they can decide some of the events and competitions, and anyway they are strong in snow and ice sports. Kazakhstan in general is stronger in winter sports than in summer sports, especially in ice hockey and snow sports.”
Xiao added that it was difficult to predict the strength of the Japanese and Korean teams as it was not the Winter Olympics, whereas Kazakhstan would be holding nothing back on such a big occasion on home territory.
When asked if the Chinese Olympic Committee had set a medal target, Xiao replied: “It is hard to say. We are going to show our best in the Asian Winter Games.”
At the ceremony, Xiao thanked the hosts for organising the 7th AWG, the sixth edition having been held at Changchun, China, in 2007.
“With strong support from the Kazakhstan government and the people, the organising committee has done a good job,” he said.
“We believe this Asian Winter Games will be an excellent event and make the Asian people more united. As always we are here for friendship and for the development of sport in Asia. We will do our best to promote sport in Asia and the unity of the Asian people.”
Just because China swept all four gold medals in women’s short track at the Vancouver Winter Olympics last year does not mean they will do the same again in Astana during the 7th Asian Winter Games.
For a start, China will be without the mighty Wang Meng, who won three gold medals in Vancouver to add to the gold, silver and bronze she collected in Torino in 2006. She is taking a break from the sport to study English in New York, but plans to return to the ice next season in the hope of qualifying for the 2014 Winter Olympics in Sochi.
But it is more the unpredictability of the sport, with its high-speed crashes and post-race disqualifications, that concerns China’s short track team leader, Wang Chunlu.
“We will do our best, but it is very difficult to say because in short track something always happens, like someone falling down,” says Wang, who is taking nothing for granted.
“In world competitions like the Olympic Games and World Championships there is a lot of people competing together and the level is very close; here we know the Koreans are really strong. It is very difficult to stay what will happen.”
Even though Wang Meng is missing, China’s short track team includes Zhou Yang, who won two gold medals in Vancouver, in the women’s 1,500 metres after Wang had been disqualified in the semi-finals, and in the 3,000m relay. A second member of the relay team, Zhang Hui, is also competing in Astana.