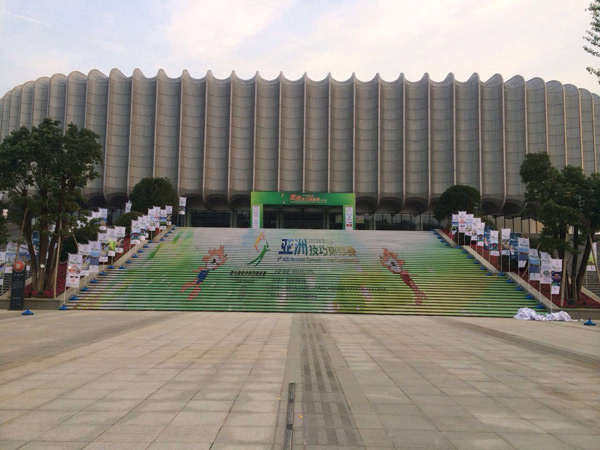 Doha (QAT) AGU Office: September 15, 2015: More than 90 gymnasts from 6 countries are set to participate in the Asian Championships, which will be held September 17-19, 2015 at the Linan Convention Center Jinnan Xin Cheng, Linan in Hangzhou.
The fact that China will host the Acrobatic Gymnastics Asian Championships is proof to the confidence that the Asian Gymnastics Union (AGU) sets in the China Gymnastics Association and especially before the preparation to organize the 25th Acrobatic Gymnastics World Championships slated for March 21 – April 5, 2016 in Putian (CHN), a metropolis located midway between Hong Kong and Shanghai. China continue as a reliable partner in targeting such major sporting events and development of Gymnastics in the state.
Acrobatic Gymnastics is popular in China, notably due to the spectacular pyramids performed by the nation’s Men’s team

Each pair and group presents one Balance and one Dynamic exercise.
Final 11-16

1 Balance Exercise + 1 Dynamic Exercise + 1 Combined Exercise
The places determined by the sum of scores from the 3 exercises (balance, dynamic and combined).

Execution
Execution is concerned with the quality of the technical performance of an exercise not the technique used:  Efficiency and logic of entries to and exits from elements; efficiency of technical execution; correctness of line and shape; amplitude in execution of pair/group and individual elements; full stretch in balance elements and maximum flight of dynamic elements; stability of static elements; confident, effective catching, pitching and throwing; landing control.

Artistry
Artistry is concerned with the choreographic structure and design of an exercise, and the variety of content including the selection of elements of difficulty.  It also includes the relationship between partners, movement and music.
Choreography
Choreography is defined as the mapping out of the body’s movements, both gymnastic and artistic, over space and time, as well as in relation to the other performance partners. It is the aesthetic linking of elements of difficulty by choreographic steps, leaps and turns.  It demands the creative use of space and the use of a variety of pathways, levels, directions, body shapes, rhythm and speed. Elements of difficulty and the choreography should use the entire floor.
Musicality & Expression
Music selection must be appropriate for age, competition, and the ability of the gymnasts. A good musical selection will help establish the structure, rhythm and theme of the exercise. All exercises must be choreographed to harmonize logically and aesthetically with the rhythm and mood of the musical accompaniment.
Partnership
There must be a visible connection and tangible relationship between the partners. Partners should be well matched to highlight the performance of their partner(s).
Partners should present a distinctive, uniform manner to maximize appropriate chemistry throughout the exercise. Partners should have the ability to go beyond their own relationship to touch the audience and the jury.