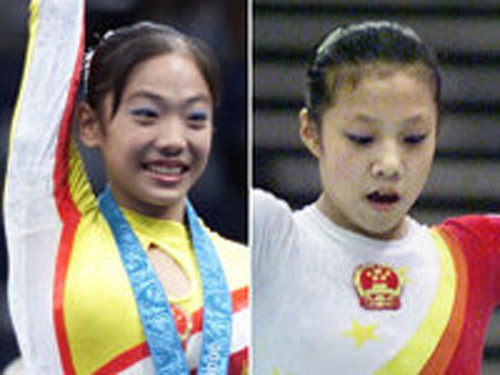 The Chinese Gymnastics Federation and the Beijing Olympic Organizing Committee are breathing a guarded sigh of relief. The darlings of the 2008 Beijing Olympics — its women’s gymnastics team — have been cleared of charges that some of them were too young to compete in the Beijing Games. This ensures that the gold medals they won on their home turf will not be taken away, which would have forever scarred the legacy of the competitors and China’s Olympics.
“We are absolutely satisfied that the age of the Chinese team that competed in Beijing was correct,” Andre Gueisbuhler, the  secretary  general of the FIG, told ABC News.
But questions over two of China’s 2000 Sydney gymnasts remain. The International Gymnastics Federation said that they “do not consider the explanations and evidence provided to date in regards to these athletes as satisfactory.”
The two athletes being scrutinized are Dong Fangxiao and Yang Yun. China won the team bronze in Sydney and Yang Yun won the individual bronze on the uneven bars. The FIG says that Dong Fangxiao applied for her credential for the Beijing Olympics with documents suggesting she was 14 years old in 2000, and therefore too young to compete, according to the AP. And Yang Yun was taped and broadcast across China in June 2007 saying she was 14 during the Sydney Olympics.
Yang Yun told The Associated Press last week that she simply misspoke during the interview, but the FIG is not convinced.
(NOTE: Yang Yun is engaged to the star of the 2008 Chinese male gymnastics team Yang Wei —  but they were not allowed to apply for their marriage certificate until after Yang Wei finished his 2008 competitions. There are strict rules for Chinese Olympic athletes, including that they can’t marry while they are still in competition for medals.)
The Chinese government, for the four 2008 athletes who have been cleared, provided passports, ID cards and family registers showing they are 16 years old or would turn 16 this year. This was enough for the FIG and the International Olympic Committee, despite many online records and state-media reports that showed several of the gymnasts were too young. Chinese gymnastics officials and state media say these records were typos.
It is unclear which particular documents are under question in the case of the two 2000 gymnasts.
Critics say, in a country like China, where documents can be forged and transparency is not necessarily its forte, it can be almost impossible to tell the real from the fake.
Li Jie, a Chinese freelance journalist in Beijing, said this raises a red flag. “This case shows the Chinese government has a crisis of confidence. We should learn from it. The Chinese government should make information more public and transparent,” she told ABC News.
ABC News sports analyst Christine Brennan said that the FIG’s decision was “expected, but unfortunate. Reporters and others found quite a bit of evidence that the Chinese were cheating by using under-age gymnasts. I’m not sure how the IOC and FIG didn’t find the same evidence, although their excuse might be that some of it seemed to be disappearing before their eyes from the internet. That sounds like something right out of a spy flick and should have raised extra suspicions.”
She added, “Even with this decision, the age controversy will forever taint China’s gymnastics performance at the 2008 Olympics, and it should.”
But the Chinese are standing their ground. The gymnastics federation here and the fans en masse agree, and not surprisingly so, that their athletes are old enough.
It was more than 10 years ago when the IOC raised its participation age for gymnasts to 16.  But many think age shouldn’t matter.
Sun Jianxia, a student at Beijing University, told ABC News, “I think athletes’ age is not the most important thing. We should focus more on their scores and their achievements. These gymnasts already did a great job at their age. We should not put more pressure on them.”
But rules are rules. These, in particular, were put into place so as not to put young children under the duress of the strict training regimens that these athletes must endure.  And all countries are supposed to follow the rules. Experts say that younger gymnasts are more agile, more flexible and less fearless, which can give them an advantage.
If it turns out that the 2000 Sydney Olympic athletes were indeed underage and provided fake documents to the FIG and the IOC, then what next? The FIG says it will take some time for them to complete their investigation.
If they conclude that the gymnasts were underage, they would most likely be stripped of their medals, if IOC precedent is taken into account. And the larger question of document forging will be raised once again. But in the meantime, the Chinese will no doubt rejoice in the fact that their 2008 Olympic women’s gymnastics team emerged both victorious and unscathed.
Article by ABC News Producer, Beijing