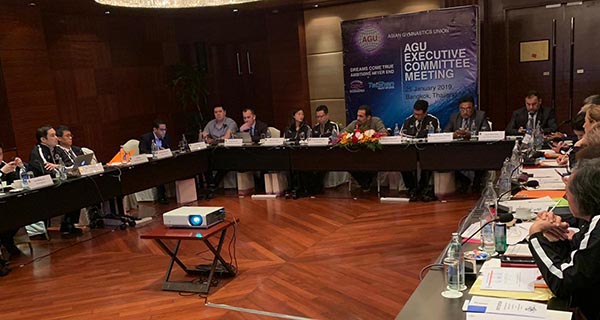 DOHA (QAT) AGU Office: The year’s first Executive Meeting (EC) of Asian Gymnastics Union, held in Bangkok, Thailand, on January 25, was a significant one as several important decisions were approved by the members.
But the most important was the announcement of prize money, which was first proposed by the AGU President Mr Abdulrahman Al Shathri and later approved by the EC.
Four Olympic disciplines – Artistic (MAG/WAG), Rhythmic and Trampoline — will receive monetary awards from this year.
Accordingly, MAG/WAG senior championships will receive USD 18,100 while Rhythmic and Trampoline events will get USD 10,100 and USD 5,000 respectively.
“We wanted to start somewhere. We thought of introducing the prize money from this year as we had promised to do so in the past. I’ve fulfilled my promise to distribute funds to the championships’ hosting nations,” said Mr Abdulrahman.
Nomination of Technical Committee Members
In another major decision that was cleared by the EC was the appointment/nomination of TC members in all the seven categories – MAG, WAG, GfA, TRA, ACRO, RHY and AER.
According to the new rule, the AGU will follow three criteria while nominating TC members.
1A) The AGU will give priority to those candidates who possess judging ability and hold FIG Level 1, 2 & 3.
1B) Candidates must have excellent judging experience in FIG and AGU events and the number of competitions they have participated as judges will be take into consideration.
2) The person(s) must have management experience in top tournaments.
3) FIG Academy Level 1 or coaching experience.
AGU Technical Committee pick its members
Meanwhile, all the TC Committees barring MAG selected their members. GfA, Acrobatic and Aerobic all picked three but President Tammy Kitagawa said she wanted to include one more into the team.
Trampoline have four members, but TC President Liu Xing informed that Hong Kong China has proposed a candidate.
However, the EC said the member federation will first have to send an official nomination to the AGU.
The rhythmic committee presented seven members, but AGU approved six same as WAG.
As many as 10 candidates had filed for MAG TC memberships. The TC President in consultation with the AGU technical team will shortlist six by following the three criteria.
New EC members attend
It was also the first meeting of the EC members after the AGU Congress in Doha in December, where the AGU body for the next four-year term was elected.
Among the new members who attended the meeting included Gymnastics Association of Thailand President Srayuth Patanasak (THA), who was elected unopposed as South East Zone Vice-President while new West Zone Vice-President, Ayad Najaf (IRQ) also graced the occasion.
Lee Wang Jung (KOR), who won 5-2 against Galbadrakh Yeruulbat (MGL), was another new face on the EC as its member. Compatriot Han Yoo Soo was another newcomer, who was elected as the new TC MAG President following the elevation of Miao Zhongyi (CHN) as new SE Zone VP.