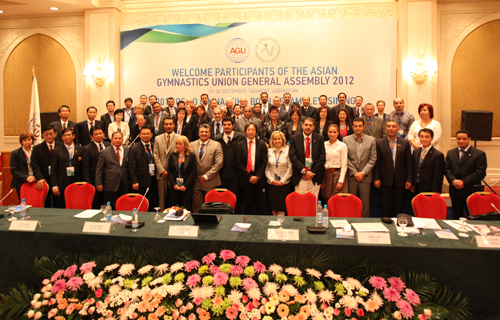 • Financial matters
• Determination of the fees and contributions for the following four years 2013 – 2016: The Congress approved unanimously to increase the annual membership fees to be as the following :
– AGU affiliated federation: 300 USD
– AGU Associated Federation: 150 USD
• Approval of the 2 years plan.
– Al Shathri stated that we cannot approve 2 years since we are comment with the prior approval of our plan for every year by the FIG. the Congress approved the next year plan 2013.

Kyrgyzstan has been suspended as they did not pay their membership fees for the year 2011 but the AGU President Mr. Al-Shathri propose to apply the sanction this year until we approved the new statutes which will be tougher.
The Congress unanimously agree about the proposal.

Mr. Anis Saoud – AGU Technical Manager gave a brief on the 2011 Project to the Congress and inform the attendants that the number of attendees increased, more and more every year which was 11 participant federations in 2010 and became 18 federations in 2011

Mr. Anis Saoud – AGU Technical Manager gave a brief on the 2012 Project to the Congress.
Al Shathri urges all federations about the necessity to dispatch coaches, gymnasts and judges to the training camps held under AGU Development Project.
• AGU Statutes:
Mr. Anis Saoud has introduced the statutes articles which are to be amended for the Congress and inform the attendants that the new version of AGU statutes should be inspired from new version of the FIG statutes.
Mr. Dhruba Bahador asks about the difference between affiliated and associated federations.
Mr. Anis Saoud gave an explanation about that and give the floor to NORBERT BUECHE – President of FIG Statutes Commission who gave a summary about the vision of the new version of FIG Statutes.
The Congress approved unanimously the new changes on the AGU Statutes which will be submitted to FIG for approval and enter in effect in January 2013
• Message the president of FIG
Mr. Bruno Grandi Addressed a speech to Congress about ways to develop gymnastics in Asia and the world and the ways we have to choose for more improvement.

• Message from the Owner of Janssen Fritsen Company ( AGU Partnership)
Jacques Janssen introduced the history of cooperation with AGU gymnastics and give a brief about the future company plans.

• Presentation from the AGU Partnership ( Janssen Fritsen) sales Manager
Mr. Bart Prinssen the sales manager of Janssen Fritsen made a presentation about the company activities, Plans and the big history of the company, and a brief on the events that J-F will equip. He also presented the new website of J-F.

• Honorary Awards and Distincutions:
AGU gave the honorary awards to the following persons:

Mrs. Lola have honored both Mr. Bruno Grandi and Mr. Al Shathri for their role to support Gymnastics in the World and Asia

• Presentation from the 3rd Aerobic Asian Championships 17-21 October 2012, Palembang, Indonesia.
Mr. Yudi UTOMO gave a Brief about the preparations, venue and other information and number of participants.

– President of AGU Mr. Abdul Rahman Al Shathri called all Asian Candidates to introduce themselves, all candidates have given summery to GA for the position they wish candidate for. The President asked all to be one hand during the next FIG elections during FIG General Assembly in Cancun.
– President informed the AGU the new headquarter will be transferred to on October 2012, New fax and telephone numbers will be provided.
– President told the GA about the Possibility of partnership with MSL timing and scoring company, Negotiations are still running and we will update all AGU Federations.
– New AGU Website: Mr. Marwan Abu Alasal made presentation of the new AGU website.