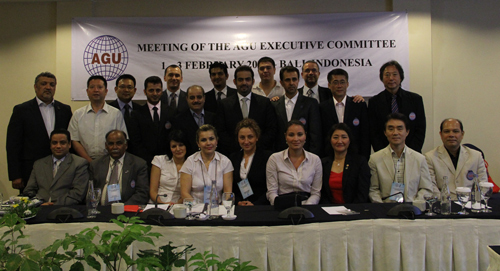 Doha (QAT) AGU Office, February 13, 2013: The first AGU EC meeting of the year 2013 was organised on February 2nd, 2013 in Bali – Indonesia with the presence of all the EC Members
Mr. Al-Shathri – AGU President takes the opportunity to extend his sincere thanks and gratitude, especially to the President of the Federation Dr. Ir. Waluyo, and the Secretary General Mr. Yudi Utomo, and of course all the people associate to this federation for the invitation of the Indonesian Gymnastics Federation to this meeting. He also congratulate the Resounding and fantastic success of the AGU representatives during last FIG Congress held in Cancun (MEX) in October 2012 who became a FIG authority members which showed great solidarity despite the absence of the third of the affiliated federations. This is a historic success for Asia representatives to be present in the different position in the FIG.

The EC members approved unanimously the following:
1.The 2012 accounts.
2.The budget of the year 2013.
3.The report of AGU Development Project 2012
4.The Proposed schedule of the AGU Development Project 2013 and the designation host federations.
5.Presentation of the new AGU Statutes version 1 of 2013 including the changes made during the AGU Congress 2012.
6.Allocation of the next AGU Events until 2014.

The Next AGU Events