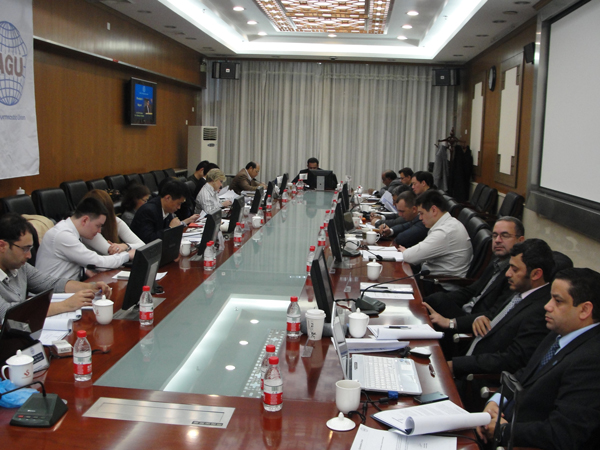 Doha (QAT) AGU Office, January 22, 2014: The first AGU EC meeting of the year 2014 was organised on January 18, 2014 in Beijing – CHINA with the presence of the most EC Members.
Mr. Al-Shathri – AGU President appreciate the invitation of China Gymnastic Association to this meeting and take this opportunity to extend his sincere thanks and gratitude, especially to the President of the Association Dr. LUO Chaoyi, the Secretary General Mme. Zhou Qiurui, Mr. Zhang Hongliang and of course all the people associate to China federation for their valuable cooperation with AGU.
Mr. Al-Shathri start the meeting with the memory of losing two valuable friends with these sad words: Losing a friend is one of the most painful experiences a person must endure in life. Everybody at some point has lost a friend, and it is hard for us to accept that a person we shared so many moments with and trusted with so many things, Mr. Sawat Sopa is no longer in our life. As many of you know, Mr. Sawat Sopa was my best friend. He did a lot for the development of Gymnastics in Thailand and in all the whole of Asia.
Also Mr. Asep Sulaeman who was the Secretary General of Indonesian Gymnastics Federation until 2011 and AGU Executive Committee Member during the period April 2007 until Mars 2011.
On behalf of AGU authorities and the Asian gymnastics community, the AGU offers its most sincere condolences to the family and friends of both of them.
The EC members approved unanimously the following:
1. The 2013 accounts.
2. The budget of the year 2014.
3. The finance report of AGU Development Project 2013
4. The Proposed schedule of the AGU Development Project for the year 2014.
5.  Designated federations to host the AGU Development Project for the year 2014 (attached the schedule of the project)
6. Allocation of the next AGU Events until 2016 (attached the schedule of the events)
The Next AGU Events 2014
* 13th Juniors Rhythmic Gymnastics Asian Championships 21-24/02/2014 Kuala Lumpur – MAS.
* 13th Juniors ART Gymnastics Asian Championships during 10-13 March 2014 in Tashkent – UZB.
* 3rd Senior & Junior Trampoline Asian Championships which will be held during 25 – 27 May 2014 in Bangkok – THA.
* 17th Asian Games that will be held in Incheon – Korea during 19/09 – 04/10/2014.
* 4th Aerobic Asian Championships which will be held in South Korea during 27 – 31 / 10 / 2014.
* AGU Congress which will be held in Doha – QAT during 07 – 08 / 12 / 2014.