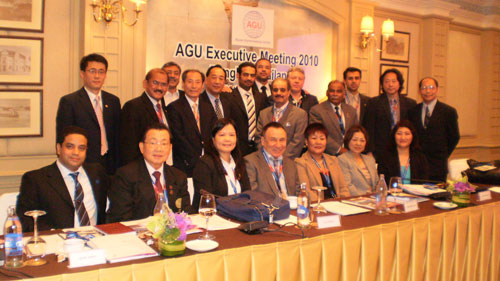 AGU office, Bangkok April 11, 2010: The Executive Committee meeting was organized in Bangkok / Thailand on 10/4/2010, the majority of the members was present at the meeting and was surprised with the wonderful hospitality and a successful organization of the meeting by the Thailand Gymnastics Association and his President Mr. Sawat Sopa – Vice-President and President of the South East Asian Gymnastics Zone (SEAGON).
The AGU President present his report that contains a lot of information and activities held in the different Asian countries and he was very satisfied through the request of some Federations that have organized a lot of the AGU events and because of the first time that we realize the organization of all the 6 projects that was plan for the following year, it is a big challenge since we received the subsidy from the FIG in September 2009 in spite of fact that we submit our project in the beginning of the year and we have only 2 months to organize all the program, it is difficult to find organizers and participants despite that we pay all the expenses related to the accommodation, meals and local transportation in addition to the experts who conduct the camp despite that we pay for them every thing plus a per diem.
* The Executive unanimously approved the following:
– The 2009 accounts
– The budget for the year 2010
– AGU development project program for the year 2010.
– Increase the per diem for the EC members to 100 USD per day.
– Give to the Affiliated Federations that have not paid their fees a chance to pay their debt before June 2010.
– Provisional admission of Bahrain Gymnastics Federation and give the recommendation to the General Assembly for the final admission.
– Distribution of the donate equipments from the FIG In depth of the development funds allocated to AGU in 2007.

Allocation of the AGU development project 2010

Allocation of the next AGU events: