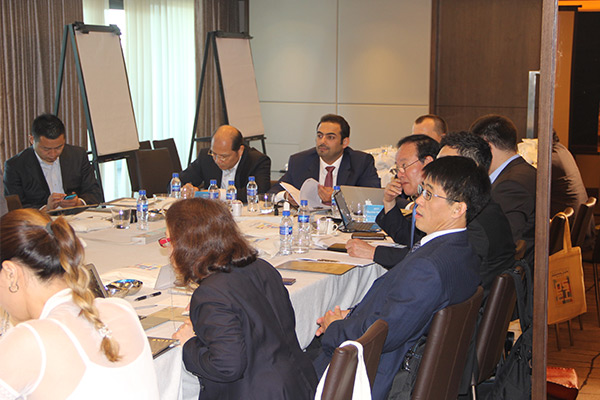 Doha (QAT) AGU Office, April 29, 2015: The Executive Committee Meeting hold in Manila – Philippines on April 18, 2015 under the invitation of the Philippines Gymnastics Federation. Mr. Abdul Rahman Al-Shathri, AGU President opened the meeting with the appreciation of the invitation of Gymnastics Association of the Philippines to this EC Meeting. He take the opportunity to extend his sincere thanks and gratitude; especially to the President of the Federation Mrs. Cynthia Carrion-Norton and the Secretary General Mrs. Bettina Pou, and of course, all the people associate to this federation for their valuable cooperation with AGU.
Mr. Al-Shathri add to his report thanks to Korean Gymnastics Association to host the next AGU Congress in Incheon 2016. This congress will give us the opportunity to meet and support our candidates to next FIG Congress that will be held in Japan; and especially to our candidate to the FIG President Mr. Morinari WATANABE; not as a person but as candidate from Asia; we have to support all candidates from Asia without mention names.

Mr. Ruslan Mustaev thanks all the people who trust to him to take this position; he add “we heard the word We are together” and I hope we stay together. I thanks Mr. Al-Shathri who make us together united. We have a project to create a gymnastics academy for Artistic Gymnastics like Dr. Luo spoke about it; Uzbekistan had experience in this field with Rhythmic Gymnastics and we are happy to help all the federations in need to develop gymnastics.

Mrs. Radiye ZAINAL WAG-TC President propose to organize a Asian Cup for Artistic Gymnastics in the future with prize money to have exciting event.

Mr. Liu Xing – TRA-TC President Request to add Synchro and tumbling events during the next Asian Championships. In addition, he proposed starting the year 2017 the Asian Championships should organized every year including the age group events.

Dr. Luo support the idea and say, “We have to take care of the Trampoline because it is easier to develop this discipline”.

Mrs. Tammy Yagi, AER/TC President mention that we need to add Aerobic discipline to next Asian Games since it was cancel from Indoor Games.

Mrs. Aigul Biyekenova ACRO/TC President added also that Acrobatic Gymnastics should also added to the Asian Games events to be develop this discipline by the affiliated federations.

Mr. Anis SAOUD – Technical Manager has presented the program of the AGU development project for the year 2015 which represent 9 projects approved by the FIG. Five of these projects will be coordinated with the FIG to organize the FIG Academies which give the opportunity to our coaches to have an FIG Academy certificates.