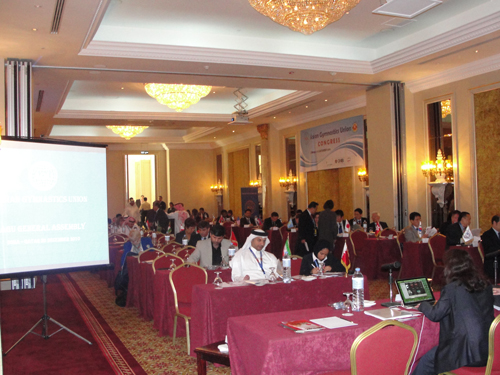 AGU Office, Doha (QAT) December 21, 2010: Qatar Gymnastics Federation has the honor of hosting the AGU General Assembly held on December 20, 2010. 33 federations from 35 federations affiliated to the AGU was present to the meeting with 71 participants.
This General Assembly was very important for the new President of the AGU Mr. A-Rahman AL-SHATHRI to show to the delegate the work done during his mandate last four years and it is very important because there will be election and the delegates will decide and elected the new AGU authorities for the next 4 years who will start from April 1st, 2011.
In his opening, the President Mr. A-Rahman Al-Shathri refereed to the work done during the last period and he fill that AGU follow up his achievement and he is very happy that AGU had achieved the success that we wanted it with the word: We promise and we realize.
We was very active during The last 4 years and I feel satisfied through the request of some Federations that demand to organize a lot of AGU events which conduct us to the success and the achievement of our target which are the development of the knowledge of the coaches in Asian and the organization of the Asian championships in different disciplines.
In the end of his report he said: Dear Colleagues, now it is for you to judge the extent to which I have been sincere to the cause of development of gymnastics in Asia during the last 4 years – Surely you are the best judge.
After the report of the different President of the AGU zones and the President of the different technical committee and the General for All committee the General Assembly approved unanimously the following:
The 2009 and 2010 accounts.
Approval of the 2 years plan.
Approval of the financial statement and the report from the auditor
The budget for the year 2011 and 2012
The Suspension of Cambodian Gymnastics Federation for not respecting their financial obligation towards the AGU.
To increase the amount of the per diem to the EC members for the meeting days in addition to one day before and one day after the meeting from 50 to 100 USD.
The membership of Bahrain Gymnastics Federation to be the federation number 36.

The program of the AGU development project for the year 2011 as the following: 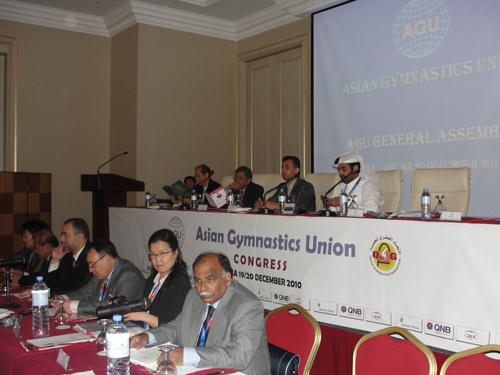 The election of the AGU authorities was quite normal with some surprises:
The General Assembly start with the election of the President position with 2 canditates, Mr. A-Rahman Al-Shathri (Qatar) the former AGU President and Mr. Hidenori FUTAGI (Japan) the ex-AGU President and the first surprise was the number of the voting in the favorite of the Mr. A-Rahman Al-Shathri with 23 votes against Mr. Hidenori FUTAGI with 10 votes.  The second surprise was with the election of the WAG Technical Committee President with 2 candidates: Mrs. Yoshie Harinishi (Japan) and Mrs. Radia ZAINAL (Syria) and the winner was Mrs. Radia ZAINAL with 18 votes against Mrs. Yoshie Harinishi with 15 votes.
You can find enclosed the new authority members of the AGU for the mandate 2011 – 2015.
After the election the General Assembly nominate Mr. Hidenori Futagi and Mrs. Lola Karimova a Honorary President. 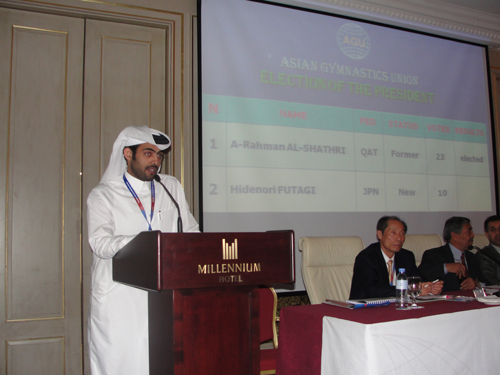