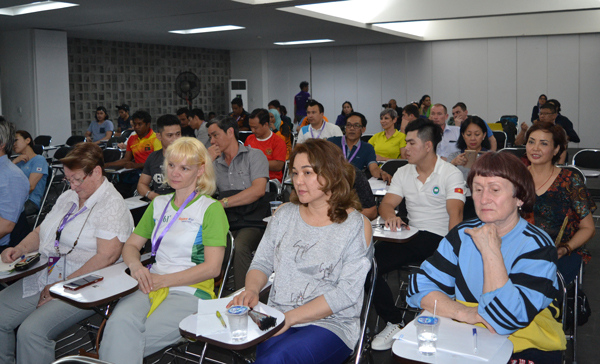 Jakarta, Indonesia: The Asian Gymnastics Union (AGU) along with the local organisers held a joint orientation programme for the participating teams’ coaches and managers at the 15th Junior Artistic Asian Championships.

The competition, which will be a qualifying event for Youth Olympic Games (YOG), will start here at Istora Senayan from April 25.

Barring the team representatives from Chinese Taipei, Japan, Iran and Iraq others were handed over with the team bibs and were explained the tournament rules and regulations.

“It gives us great pleasure in hosting the first international gymnastics competition after so many years. It’s a great moment for us to welcome you all in Indonesia,” said Yuliati, who is also the Indonesia Gymnastics Association 1st Vice-President.

Meanwhile, most of the teams have already arrived here and they will have a feel of the gymnasium tomorrow during their scheduled trainings followed by the judges meeting.

“We look forward to an intense competition as most teams will be fighting to seal YOG berths,” said Saoud.

At the other end, the gymnasium is all decked up to host the championships, which will be a test event for the Asian Games.