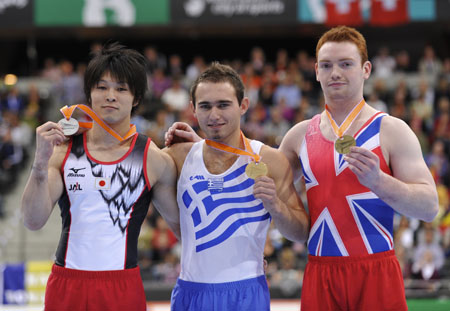 ROTTERDAM (NED), AGU Office, October 23, 2010: 2nd FIG Artistic Gymnastics World Championships Rotterdam (NED), October 16 – 24, 2010 The Ahoy Arena filled up once again with an enthusiastic crowd excited to see more top level gymnastics action here in Rotterdam! Enter the specialists, who competed in the first of two days of Apparatus Finals. Five apparatus were featured, three for men and two for women. In contrast to the All-around competition, one event took place after another, giving spectators an opportunity to follow each gymnast’s routine. Here’s what they saw:

Uchimura was the first to take to the floor, raising the bar for this Final with 15.566 points. He was followed by Eddie Penev (BUL), confirming his qualifying score (15.066) and qualifying in fifth. Flavius Koczi (ROU) bettered his score to 15.066 and tied with Penev.

Then came Kosmidis. Would he be able to repeat his first-rate preliminary performance and conquer the top? He nailed his routine, which boasted high Difficulty and flawless Execution; 15.700 and first place at this point.

Steven Legendre (USA) slipped on his second acro pass, touching the ground; he took another misstep later during his routine. Qualified in fourth, the 2009 finalist scored a disappointing 13.600.

Seventh qualifier Thomas Bouhail (FRA) upped his qualifying score to 15.200, which meant rank three behind Kosmidis and Uchimura for now. But with two strong contenders still to come, party time would have to wait. Daniel Purvis (GBR), third in Qualifications, would push Bouhail from the medal ranks if he managed to repeat his preliminary score (15.266). He ultimately bettered it to 15.366; rank three.

Last gymnast on Floor, 2008 Olympian Alexander Shatilov, still had a chance at shuffling the medal ranks. He qualified with 15.308 points and improved to 15.333 today. Not enough to beat Purvis. He finished fourth.

With reigning Vault World Champion Kayla Williams of the USA missing in action and Germany’s veteran and 2008 Olympic Silver medallist Oksana Chusovitina not qualified for this Final, the world was seeking a new champion on Women’s Vault. Aliya Mustafina and Alicia Sacramone looked promising during Qualifications and Team Finals when they finished 1-2 each time, with a huge margin over the rest of the field. Russia’s coach decided to replace Ekaterina Kurbatova, who had a better qualifying score during preliminaries, with Tatiana Nabieva, who excelled in Wednesday’s Team Final, where she earned the fourth best score on the apparatus. 2009 Silver medallist Ariella Kaeslin (SUI) also hopes for a medal.

2008 Olympian Sacramone was first up, marking 15.200 points. Would that be enough to take the title? Kaeslin, qualified in fourth position, received a .1 deduction on her second vault, 14.783.

Mustafina, wowed the crowd with high Difficulty and clean Execution on her first vault, but had to accept a .1 deduction on the second, adding up to a total of 15.066, which meant second place behind Sacramone at this point.

Next up was Imogen Cairns (GBR), Gold medallist of the recent Commonwealth Games in Delhi (IND), and seventh qualifier here in Rotterdam. She scored 13.999 points.

Jade Fernandes Barbosa’s (BRA) performance was awaited anxiously by Kaeslin, who sat in third position at this point and risked being pushed down by the Brazilian. And that’s exactly what happened. Qualified in third, Fernandes Barbosa confirmed her position, bettering her score to 14.799 and taking off with Bronze.

With reigning World Champion Zhang Hongtao (CHN) absent, a nip to tuck race for the title on Pommel Horse was predicted between Kriszian Berki (HUN), Prashanth Sellathurai (AUS) and Cyril Tommasone (FRA), who placed on ranks two to four in the London Final and topped the Qualifications. Furthermore, Louis Smith (GBR) aimed to make up for his disastrous fall from the apparatus during the Final on his home turf last year in London.

Berki was first up. Would he be able to repeat his qualifying top score of 15.900? Showing a number of excellent skills, Berki marked 15.833, hard to beat.

After one of the tallest gymnasts, Berki, one of the shortest came next. Sellathurai travelled the pommel horse at breakneck speed, but due to a lower Execution stayed behind Berki, confirming his qualifying score (15.566).

Then Saso Bertoncelj (SLO), who qualified in sixth, struggled and fell off, which left him with a disappointing 13.933.

Filip Ude (CRO), who tied with Tommasone during preliminaries, made a slight mistake at the end; 15.316.

Tommasone looked confident and got through his routine without any hesitation. He placed on third rank behind Berki and Sellathurai at this point (15.433).

Would Smith be able to scramble the ranking? This time around, he nailed his routine, scoring 15.733 and sliding into second!

Belgium’s pride and sole representative of his country in the Finals, Donna Donny Truyens, performed second to last. He looked good, but struggled toward the end of his routine; 14.133.

Armenia’s Pommel Horse specialist, Harutyum Merdinyan, was last up; he was unable to make a difference to the table’s top and finished sixth with 15.166 points.

Reigning World Champion and top qualifier He Kexin (CHN) was the one to beat on Uneven Bars today. However, with her compatriot Huang Qiushuang, Beijing finalist Beth Tweddle (GBR), Aliya Mustafina (RUS), as well as 2009 Bronze medallists (tie) Ana Porgras (ROU) and Rebecca Bross (USA) also in the game, this promised to be an interesting event!

He was up first. The crowd held its breath when the favourite fell on her layout jaeger and all her hopes vanished. 13.966.

The next shocking moment for China came when Huang, who had a wonderful routine going, slipped off the lower bar. 14.400 and no medal for her either.

Tweddle, qualified in third, saw her chance for the title. She impressed the crowd with her amazing flight elements, and coming through her complex routine flawlessly, Tweddle improved her qualifying score to 15.733 and set the mark for the rest of the field.

Sloan came next and hit her routine square on the head. Due to a lower Difficulty, she stayed behind Tweddle, 14.666.

Mustafina performed a great routine but she took a big step on her landing, which lowered her Execution score. She scored 15.600 and took 2nd place for now.

Elisabeth Seitz (GER), who had qualified in fifth position, learned a lesson from the school of hard knocks today, falling off the apparatus twice.

2009 Bronze medallist Ana Porgras stuck her routine and settled fourth for now (14.600), with one more competitor to come.

Reigning World Champion Yan Mingyong got a chance to defend his title on Rings, with tough competition coming from team-mate and Olympic Champion Chen Yibing, who qualified in top position. Also promising were Japan’s Koji Yamamuro and Beijing and London finalist Matteo Morandi of Italy.

Korea’s Won Chul Yoo was first up on Rings, performing nicely and getting 15.433 points to show for it. Chen Chieh Yu of Chinese Taipei came next. The sixth qualifier hesitated slightly; 15.266 for him.

Yan then gave a breath taking demonstration of strength on his way to the podium, confirming his qualifying score of 15.700.

Third qualifier Yamamuro gave a solid routine (15.500) that could end up earning him a medal.

Experienced Morandi, who had qualified in fourth rank, nailed his routine and outscored Yamamoto today, securing him the Bronze (15.666).

All eyes were then on Chen, who could easily grab the title if he performed as well as in Qualifications, where he marked the top 15.900 point score. He stuck his landing and there’s no question about it: Chen will run off with Gold today. 15.900 again!

The performance of Kenya Kobayashi (JPN) concluded this first day of Apparatus Finals. His 15.300 brought him rank seven. 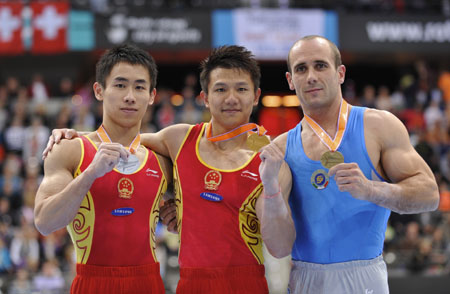