Apparatus Finals (CIII) – Day 2: China finished first in the total of the medals 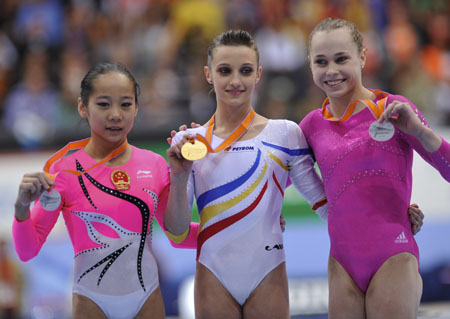 ROTTERDAM (NED), AGU Office, October 24, 2010: Spectators made their way to Rotterdam’s Ahoy Arena today to watch the second day of Apparatus Finals conclude with the 42nd Artistic Gymnastics World Championships. Five exciting events were on the programme: men on Vault, Parallel Bars and Horizontal Bar as well as women on Beam and Floor.

The local crowd got especially excited about the two Dutch competitors lining up today, Jeffrey Wammes on Vault and Epke Zonderland on Horizontal Bar.

On Vault, Beijing and London Bronze medallist Anton Golotsutskov (RUS) and 2006 Silver medallist Dzmitry Kaspiarovich of Belarus finished 1-2 in Qualifications by a narrow margin. France’s Thomas Bouhail, 2008 Olympic Silver medallist and fifth in London, followed in third rank. Will one of them take the title today? Fans also kept a close eye on the Netherland’s own Jeffrey Wammes and Flavius Koczi (ROU), who ran off with world Silver last year.

Wammes opened the competition supported by an enthusiastic crowd decked out in orange. With less Difficulty than most of the other finalists, and a .1 deduction on his first vault when he took a step out of bounds, Wammes scored 15.750 points.

Golotsutskov stuck both of his 7.00 Difficulty vaults and set the bar high for this Final. 16.366; who could beat that?

The answer was not long in coming. Supported by French fans, Bouhail made a strong appearance and took the top with a narrow margin over Golotsutskov (16.449), impressing with flawless Execution. Bouhail tied with Leszek Blanik (POL) for first place in Beijing’s Olympic Final, but was dropped to Silver in keeping with the tie-break rules.

Koczi took a long step back on his first vault and a slight hop on the second. 16.208.

Ukraine’s Andriy Isayev (UKR) had lower Difficulty on his first vault and scored a total of 16.049.

Hak Seon Yang (KOR) wowed with high Difficulty and excellent Execution on his first Vault, but received deductions on his second. His total of 16.266 points placed him in a provisional third behind Bouhail and Golotsuskov.

Last competitor was Luis Rivera of Puerto Rico, who qualified in eighth position. With less Difficulty, he had little hope of playing in the big league but showed excellent Execution that placed him seventh today with a total of 15.945.

Bouhail wrote history today, winning the first ever Gold for France on Vault.

eam. A mere seventh last year, the seventeen year old, topped her best apparatus during Qualifications, the All-around and the Team Final. Rebecca Bross (USA) followed in second in the preliminaries, tying with Porgras. With defending World Champion Deng Linlin of China and 2009 Silver medallist Lauren Mitchell of Australia also in, the Beam Final promised to be a hair-raising event!

Mitchell was up next. The young Australian mastered her Difficulty-packed routine (6.60) and bettered her qualifying score to 15.200. Enough for a medal this time around?

Bross was eager to make up for her Beam debacle during the All-around Final, when she fell off the apparatus. She stuck it! And took the lead with 15.233 points.

2009 European Champion Yana Demyanchuk (UKR) performed a solid routine but failed when balancing her dismount; she landed in a seated position. 13.733.

Favourite Porgras was up next. Repeating her breathtaking performances from earlier here in Rotterdam, the young Romanian boasted the highest Execution score of this Final, which brought her the lead (15.366).

Mustafina, who’d won four medals at these championships already and who might have written history if she’d made it to the podium in both of today’s Finals, underrotated her standing Arabian and fell off the beam. She scored a disappointing 13.766. This being her 17th routine in Rotterdam, Mustafina could easily be exhausted by now.

A down day for the Russians on Beam, the youn

gest gymnast of these championships, Anna Dementyeva, wobbled a few times and had issues with balance. She also fell off. 13.966 for her. 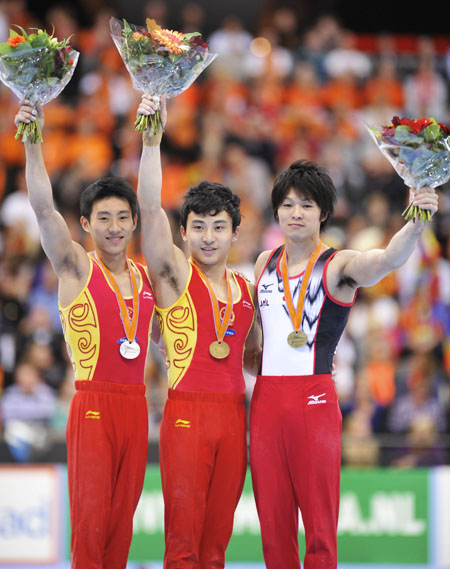 On Parallel Bars, the Qualifications saw China’s Feng Zhe and 2009 Silver medallist Teng Haibin on top. The Chinese duo will be challenged by Beijing finalist Fabian Hambuechen (GER) and Koji Uematsu of Japan. Dutch Epke Zonderland failed to qualify for this Final in eleventh rank.

All-around Champion Kohei Uchimura (JPN) was the first competitor on Parallel Bars and with consistency his best ally, he pleased the crowd with another strong performance. 15.500

Kazakhstan’s Ildar Valeiev’s routine boasted the highest Difficulty in this Final (6.90), but he was low on Execution, just as he was in Qualifications, and scored a total of 15.183.

Top qualifier Feng nailed his routine and with an even better score, 15.966, he took the lead. Hard to beat!

Poland’s Adam Kierzkowski (POL) had the lowest Difficulty 6.00, but a high Execution brought him a total of 15.200 points.

Uematsu had made a few mistakes that resulted in low Execution (8.733). His total of 15.233 would not be enough to take a medal today.

Samuel Piasecky (SVK) could not keep up with his qualifying performance, dropping to 15.166.

Hambuechen was the last competitor on Parallel Bars and he had a good shot at elbowing Uchimura from his Bronze medal rank. He gave a strong performance, but a substantial hop on landing cost him a spot on the podium. He finished fourth (15.366).

Beth Tweddle (GBR) did not qualify, so the title was up for grabs today. The Russian duo with newly crowned All-around Champion Aliya Mustafina and Ksenia Afanasyeva led the Qualifications, promising candidates for the vacancy. But with Sandra Izbasa (ROU), who tied with Afanasyeva during preliminaries, as well as 2009 Silver and Bronze medallists respectively, Lauren Mitchell (AUS) and Sui Lu (CHN), also in the game, the battle would be a tough one.

Mustafina, first gymnasts to take to the floor, gave yet another demonstration of her impressive talent. Apart from one slight misstep, she hit her routine beautifully, scoring 14.766.

Izbasa, having made an impressive comeback from her torn Achilles last year, had a less than lucky day today. She stepped out of bounds twice and got a .8 deduction. With 13.983 she stayed below her potential.

2008 Olympian Afanasyeva fell on knees after her first and last tumbling passes, finishing with a disappointing 12.700.

2006 World All-around Champion Vanessa Ferrari (ITA), who had undergone ankle surgery last year, is not back with her full Difficulty yet. But sticking all her landings today she nailed her routine with the highest Execution score. To the boos of a disgruntled crowd, who had expected a higher score, she placed behind Mustafina with 14.600 points.

Diana Maria Chelaru (ROU) pleased the crowd with speedy tumbling and her well choreographed routine. Her 14.766 tied her with Mustafina on top of the table, improving by .3 as compared to Qualifications.

2009 World Bronze medallist Sui, who qualified in fourth, aimed to redeem herself after having failed on Beam during the Team Final. She improved slightly from the preliminaries, scoring 14.666 and taking fourth rank.

Mitchell, the 2009 Silver medallist, performed last, knowing she had to better her score if she were to mount the podium again. Her flawless routine was awarded with 14.833 points and first place! Mitchell wrote history today, becoming Australia’s first ever female Gymnastics World Champion, and Mustafina’s five medals are the most earned by any gymnast at an Artistic Gymnastics World Championships since 2001! 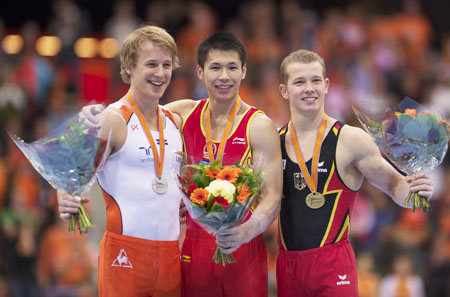 The Horizontal Bar Final was action packed! The event featured tried and true gymnasts alongside the up and coming, all with a good chance of winning a medal, making this an incredibly open competition. Placing second last time in London and with the reigning Champion Zou Kai (CHN) absent, Epke Zonderland was going for the title as he performed before his home crowd today. However, he faced tough competition from top qualifier Zhang Chenglong (CHN), Koji Uematsu (JPN) and Fabian Hambuechen (GER), the 2007 World Champion and Beijing Bronze medallist.

Uematsu was the first one up. Taking a huge risk, he failed to grab the bar after his 1/2 Takamoto to an immediate Kovacs and fell. In the follow up, Uematsu lost speed and continued to struggle. 14.000 and a great disappointm

The fans, who had heated up the arena with rhythmic clapping and la Ola earlier, held their breath as Zonderland stepped up to the plate. Carrying all hopes of the host nation in this Final, he had increased his Difficulty to 7.30. Zonderland performed exceptionally well under pressure and hit his routine spot on as the crowd cheered in delight.

Feng was hard put to compete after the Dutch favourite. He managed a 15.166.

With Christopher Brooks and Danell Leyva, the USA had entered two competitors to this Final, both who were up next. Brooks scored 15.383, no danger for Zonderland’s lead, but Leyva’s exciting and complex routine with high Difficulty came close: 15.666.

Popular Hambuechen was aiming for the podium again after he had dropped out of the 2009 Worlds with a foot injury. His 15.966 carried him into second place but with his compatriot Philipp Boy and Zhang still to come, he kept his fingers crossed much like Zonderland.

Boy’s routine boasted high Difficulty (7.3) as well, but lower Execution ranked him under Hambuechen by a narrow margin (15.833). The newly crowned All-around Silver medallist competed an impressive total of 18 routines during this tournament.

With only one competitor left, Zonderland and Hambuechen had secured their spot on the podium, but Zhang’s performance could still have an impact on who would get what.

And it did! The top qualifier had added to his Difficulty, boasting an incredible 7.5 and finishing first; he snatched the title right out of Zonderland’s hands.

Apparatus Finals (CIII) – Day 2: China finished first in the total of the medals