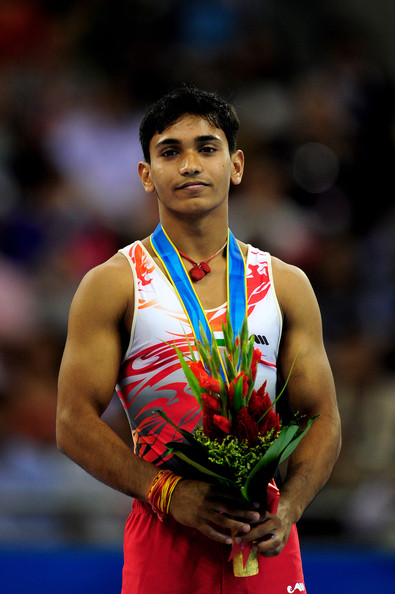 Kim, the only gymnast so far who managed to break China’s domination, was excited to have his first title of Team in Guangzhou.

“I have been dreaming of the gold, like a hundred times a day.” he said.

“In Doha four years ago, I also had a shared gold (on Pommel Horse). I hoped that this time I could do better to win alone. But we two performed very well and I’m pleased with the result.”

The bronze medal went to Ashish Kumar of India, who grabbed 14.925 to have his country’s first-ever Gymnastics medal in the Asiad history.

“I’m very happy that this medal comes with me. I think it will encourage the new generation of gymnasts to do better in the future.”

Earlier this year, Kumar was third on Floor and second on Vault at the Delhi Commonwealth Games, which were also the best results of Indian Gymnastics.

Ashish Kumar scripted history on Tuesday when he became the first Indian gymnast to clinch an Asian Games medal by securing a bronze in the Men’s Floor event of the Artistic Gymnastics, here on Tuesday.

Kumar clinched the bronze with an aggregate of 14.92 behind gold medalists Chenglong Zhang of China and South Korean Soo Myun Kim, who finished at an identical score line of 15.40.

In the first round, Kumar scored 6.30 points while in the final round, the Indian managed to accumulate 8.62 to finish third in the event.

Kumar had finished a disappointing 23rd in a 24-participant field in the final of the men’s individual all-round artistic gymnastics competition yesterday at the Town Gymnasium. The 19-year-old Indian had scripted history last month when he won a silver and a bronze in vault and floor for India in the Commonwealth Games in Delhi.

China also won on Women’s Vault and Uneven Bars, by Huang Qiushuang and the Multiple world champion He Kexin respectively.

“I still had some flaws tonight because I felt tired. I hope tomorrow I can present my best,” he said.

“Last time I was competing in Asiad was back in 2002. I also won Pommel Horse. So I’m very pleased to make it again eight years later.”

The veteran, 25, just returned to light at the last month’s World Championship in Rotterdam after a six-year absence from top international events.

Playing a key role in China Gymnastics fiasco in the 2004 Athens Olympics, he was heavily criticised and had since not been selected for any major international events until the worlds.

He also had a faulty 11th-place performance in All-Around in Rotterdam. While doubts surfaced that the Athens ghost was still haunting him, he proved himself on home turf.

The Chinese “uneven bars princess” showed her amazing signature flip again for a highest-of-the-night 16.425. Her compatriot Huang Qiushuang clinched a silver medal in 15.825 and Japanese Koko Tsurumi was third in 15.300.

He already had titles of Olympics, World Championships and World Cup finals under her belt. The National Champion now achieves an unprecedented “Grand Slam” in one event for Chinese women gymnasts.

In the Asiad final, she even increased the difficulty to 7.4, which few gymnasts in the world can manage.

Also shining was his compatriot He Kexin, who won Uneven Bars to complete her super “Grand Slam” of winning all major tournaments home and abroad.

The Chinese “Uneven Bars Princess” showed her acrobatic signature flip again for a highest-of-the-night 16.425. Her compatriot Huang Qiushuang clinched a silver medal in 15.825 and Japanese Koko Tsurumi was third in 15.300.

He already had titles of Olympics, World Championships and World Cup Finals under her belt. The national champion now achieves an unprecedented “Grand Slam” in one event for Chinese women gymnasts.

A fall off the bar in Rotterdam snapped her stunning winning streak of 15 in all tournaments but she defended her dignity with flawlessly executing the same routine of a 7.4 D-score in the Asiad, where easier maneuvers would be enough to ensure her gold. “I want to prove myself. I chose the same highest difficulty because I know I can rise where I fall,” she said.

Zhang gained 15.400 points to the ovation of home spectators. Although Kim’s execution was secondary to the 20-year-old, he finished with the same result thanks to a higher D-score of 6.6.