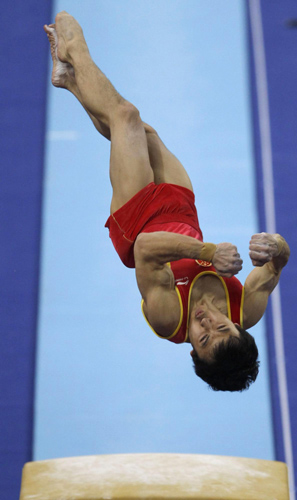 AGU Office, Guangzhou November 17, 2010: The Artistic Gymnastics event finish today with more medals for China and the competition start with the MAG Vault: the gymnast

Yang Hak Seon of R.O.Korea won the gold medal in Men’s Vault Artistic Gymnastics with a result of 16.4000 at the 16th Asian Games in Guangzhou.

Sui scored 15.425 points to finish atop among the eight finalists, five of whom fell from the beam during their respective routines. She had won the gold medals in Team and All-around events earlier this week. Her Chinese compatriot Deng Linlin took the silver medal on 15.200 points, while Luiza Galulina of Uzbekistan had bronze on 14.350. Following are the results of the Women’s Balance Beam final at the 16th Asian Games here on Wednesday: Results here

Feng Zhe of China lived up to his billing as the world champion on Men’s Parallel bars when he won the discipline at the Guangzhou Asian Games here on Wednesday.

Feng, who won the Parallel bars last month in the world championships, produced a well-executed routine on the bars for the highest score of 15.650 points, edging Olympic bronze medalist Anton Fokin of Uzbekistan into the second place by a margin of 0.300 points.

Yoo Won Chul of South Korea was third with 15.275 points.

Sui Lu won the gold medal in Women’s Floor Artistic Gymnastics with a result of 14.700 at the 16th Asian Games in Guangzhou on November 17.

Zhang Chenglong of China won the gold medal inMen’s Horizontal bar Artistic Gymnastics with a result of 16.225 at the 16th Asian Games in Guangzhou.