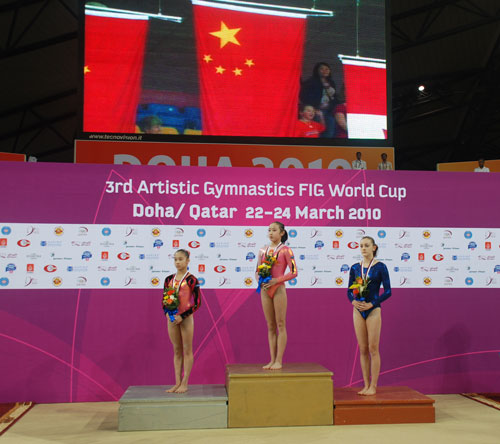 DOHA 23-3-2010: China won four medals including two golds to dominate at the Third Artistic Gymnastics FIG World Cup at the Aspire Dome yesterday.
In the men’s section, Yuguo Huang won Floor event gold medal while Quishuang Huang claimed women’s category gold in Uneven Bars event.
China’s other medals winners on the second day were Zhendong Dong (men’s Pommel Horse bronze) and Liufang Wu (women’s Uneven Bars silver).
Huang topped the standings in the men’s Floor event. The 20-year-old won his first gold medal in a major competition.
“I am very happy to win here,” Huang said after receiving his medal.
Japan’s Hisashi Mizutori and Jeffrey Wammes of the Netherlands took the second and the third positions respectively.
In the women’s Vault event, South African Jennifer Khwela took the gold medal ahead of Croatian Tijana Tkalcec and Hiu Ying Angel of Wong of Hong Kong.
It was a moment to savour for the 18-year-old as she had topped the podium for the first time outside Africa. Vault was also her pet apparatus event and she did not disappoint.
“I am really very happy to have won this gold. This is my first major medal outside Africa,” Khwela said.
Khwela said she was surprised by the performance where she tallied 13.900 points.
“Actually I am surprised with my gold-medal winning effort. I did not expect to come on top in such a competitive field of gymnasts,” she added.
Khwela’s coach Julie Adamson too was delighted with her ward’s effort.
“We are all proud of Jennifer today. This is here first major victory outside of Africa and we have to commend her efforts. Aspire Dome is such a wonderful venue and to win here is great for us,” the coach said. 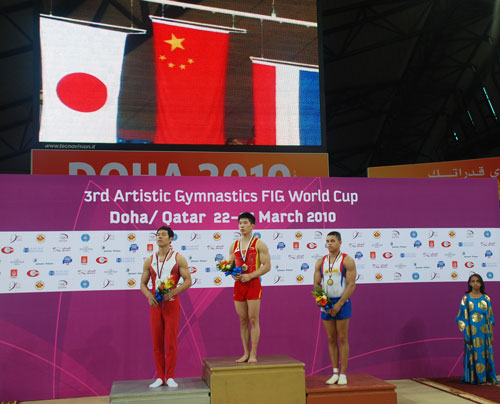