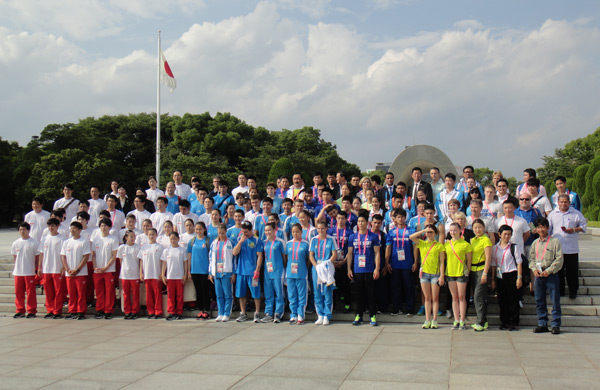 Hiroshima (JPN) AGU Office, July 28, 2015: In the occasion of the 6th Artistic Gymnastics Asian Championships that will held in Hiroshima JPN during 31/07 – 02/08/2015. Japan Team advanced by the world champion Kenzo SHIRAI, participant teams, Hiroshima City, Hiroshima Prefecture, Hiroshima Gymnastics Association, Japan Gymnastics Association and Media people was present in the Peace Memorial Park to celebrate the Hiroshima Peace Memorial Ceremony.
On this day, the Peace Memorial Ceremony hold in front of the Hiroshima Peace City Memorial Monument erected in the Peace Memorial Park to appease the souls of those killed by the atomic bomb and to pray for eternal peace on Earth. During this ceremony, the Secretary General of Japan Gymnastics Association and FIG EC Member Mr. Morinari WATANABE announce a Peace Declaration, delivers appealing for the abolition of nuclear weapons and for the realization of eternal world peace.
At the end, of flower bouquets were laying on the monument for the repose of the souls of the atomic bomb victims and for peace by Mr. Morinari WATANABE, Mr. Anis SAOUD (AGU), Rima Kizilgun WAG Technical Committee and 2 Japanese Gymnasts (one MAG and one WAG) and one judges representative.