Carrion praises AGU’s support to develop gymnastics in the Philippines 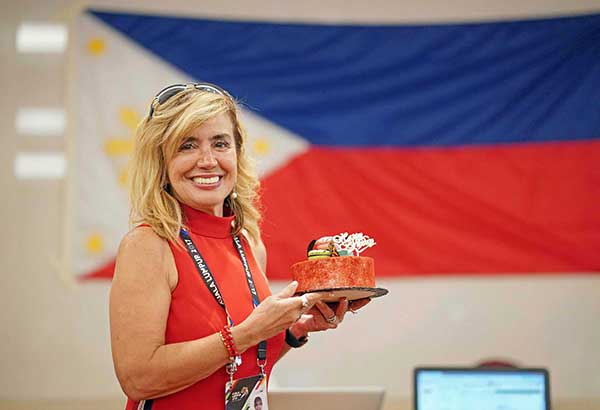 Doha (Qatar), AGU Office: Gymnastics Association of the Philippines (GAP) President Cynthia Carrion said with the support of Federation Internacionale de Gymnatique (FIG) and Asian Gymnastics Union (AGU), efforts are put in to promote the sport and develop Class A athletes in the country.
“When I took over the GAP four years ago, it was like starting from scratch. We had no coaches and international judges,” Carrion told www.philstar.com. “Slowly we got on our feet. Today, we’ve an outstanding Japanese coach Munehiro Kugimiya and five international judges. The FIG and AGU are being very supportive.”
Carlo Yulo, Kaitlin de Guzman and Reyland Cappelan will represent the country at this year’s Asian Games in Indonesia.
“We didn’t win a single medal at the 2014 Asian Games, but we’re ready to compete and bring home medals. Before the Games, we plan to send our gymnasts to international competitions in Melbourne and Doha,” she added.
Yulo won the gold in vault and silver in floor at the International Junior Gymnastics competition in Yokohama, Japan, last September. He couldn’t participate in the SEA Games because he was under-age. But he will be eligible to compete at the continental Games in September.
Cappelan bagged the gold in floor in the last two SEA Games while De Guzman won gold in uneven bars, silver in floor and bronze in balance beam at the SEA Games last year.
“We’re trying to raise $20,000 to pay for Carlo’s tuition for a year at Teikyo University where he’ll get top training,” said Carrion.

Carrion praises AGU’s support to develop gymnastics in the Philippines