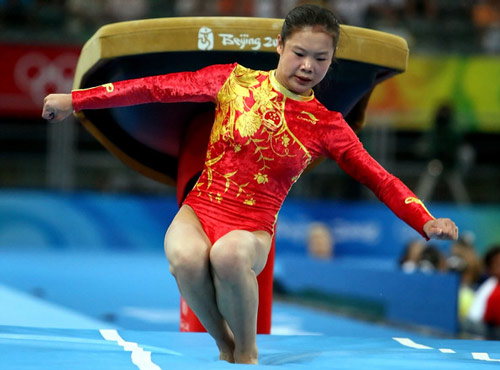 Doha (QAT), AGU office on August 14, 2011: The sad news coming from the Chinese camp is that everyone’s favorite team leader, Cheng Fei has been injured again. This time the vaulting champion has suffered a soft-tissue injury of the knee.
This came as she was supposed to compete in the Universiade in Shenzen being held soon.
According to Lu Shanzen;
‘A few days ago Cheng Fei knee soft tissue injury, there is some water, but uneventfully, has returned to normal training and she just appeared in the training hall, on the team is an incentive. unavoidable injury athletes in hard training or are afraid of difficulties, but we take a look at Cheng Fei, will be very consciously to overcome difficulties. ‘
According to Universiade team coach, Hude Chon;
‘Although Cheng Fei Injured training, but she was very optimistic, good spirits the State Sports General Administration and the national gymnastics team of Cheng Fei adhere to fight with injury , never give up the positive spirit of giving very high marks, she is a spiritual banner, to the team set a good example. ‘
This is very sad news for those holding out hope we might see her in Tokyo.  Let’s hope it won’t hold her back for long.

– Cheng Fei is the Straight Entrance the Undergraduate college students in Wuhan Institute of Physical Education in 2009, the 25th University Games in Belgrade, 21-year-old Cheng Fei stand on the first stage of the Universiade, I did not expect that term Universiade has become a way of life in the Philippines An important turning point. the face of the Olympic Games in Beijing over North Korea over their players Hongen Zhen, Cheng Fei in the ‘Cheng Fei jump’ on the set back, a short 11 months, lost twice to the same opponent, which will undoubtedly Cheng Fei brought great blow. Even worse, Cheng Fei is also the game after aggravating a right knee ligament injury, which led directly to the National Games that year she missed.
After two years, Cheng Fei gradually fade out the outlook of people, even many people thought she had retired. In fact, Cheng Fei has not given up, in her heart, still thinking about the day to be back on track. Thus, Cheng Fei began a long sidelined with injuries, rehabilitation training and weight reduction. In those difficult years, the gym, ‘Big Sister’ has become more mature, she says, is that part of the day so that their back pain recognize the ‘gymnastics ‘content,’ Gymnastics for me, is no longer a success or failure of the utility, but to how to embody the Olympic spirit more faster and more of a stage. ‘Cheng Fei said.
In fact, as the Olympic champion and 9 time world champion, the Chinese women’s gymnastics team won the world championship up to the players, Cheng Fei do not have to so ’embarrassed myself,’ she admits: ‘When on whether to stick with it the question, I am entangled. The Take the title and honor are obtained, and then go fight necessary? retired women’s gymnastics at my age, I should have left him. Now, I am very grateful to many people who encouraged me to stick with it, and now my heart is also There I want to achieve. ‘
– Bearish success, willing to set sail again from Shenzhen
Elaborate on them, like Cheng Fei and Shenzhen Universiade has a bond, as the Shenzhen Universiade ambassador, she originally planned on a comeback at this Universiade, but the recovery is better because of injuries, the first back times it appeared in mid-May ahead of Kunshan in the National Gymnastics Championships, but in any case, she is still very supportive of the Shenzhen Universiade, also cherish the opportunity to participate. Cheng Fei said: ‘All Championships to find out first, I was just under the Competition feeling, an important goal this year, I was in Shenzhen, the World University Games get good results. ‘ 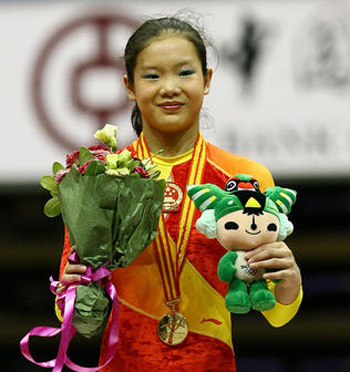 In the days sidelined with injuries, because of the stopped train, Cheng Fei sharp increase in body weight, body weight to return to the track became her biggest obstacle, but the dedication she paid more than other athletes and the pain and sweat. Last year, when winter In the national team in the gym often see such a scenario: other small players are practicing with the single action, wearing pants to lose weight but Cheng Fei, and training equipment in a rivalry. ‘reducing the weight, I eat a difficult time. ‘does not process the Philippines also stressed that only through tribulation before you can see the rainbow after the winter training has been vested with the way that the Philippines is back.
Now, re-Cheng Fei took off even more to understand the true meaning of the game, but also were more self-confidence. ‘Stopped due to injury, this stop is for two years. Now I’m thinking about how to get the action better, how to put Gymnastics beauty and their ability to fully displayed, and not afraid to succeed as it was before failure. ‘Cheng Fei said.
– Facing the future, so China’s Svetlana Khorkina
In May at the National Gymnastics Championships, Cheng Fei jump in the strength of the silver medal only once, but on this performance, but frankly Girl satisfaction, ‘I’m injury has not fully recovered, for those that have been very satisfied with the results I . Now is not my best. ‘
Cheng Fei Ming white, full results from the Championships best performance of her own have a lot of room for growth. She said the biggest goal of the recent ‘World Universiade on for better performance.’
Today, China’s Cheng Fei, although the oldest women’s gymnastics team players, injuries and young players a serious threat to her, but in her mind there is a more Tigers aim is to do in China Khorkina. ‘I’ve been pondering a question, many foreign competition and older players can continue to get good grades, why can not the Chinese athletes? If I can persevere in our country a lot of gymnastics is a breakthrough concept and confidence, I am willing to This breakthrough contribute. ‘This is perhaps the greatest force Cheng Fei insisted.
Advantage and Existing:
The insistence of people touched by Cheng Fei
Shenzhen Special Zone Daily reporter LIU Yan
In all eyes, the gymnasts are physically thin, light beat in the air, with increasing age, development, weight gain and many other questions for the team members have retired, as is often said that practice is to eat young rice Gymnastics , Wuhan Institute of the coach, Cheng Feehan Advantage and Existing division believes that this project is more qualitative way of thinking, in fact, the movement of foreign players are better than his career long of a gymnast, Cheng Fei now we think it should have passed retirement age, still In team training, her insistence for the extension of China’s gymnasts to provide a lot of life experience.
Cheng Fei back again after the injury, for she is also a great challenge, not only weight reduction and development issues, as well as injury has not fully recovered, Advantage and Existing Cheng Fei also points to the hardships: ‘Now the weight reduction is Cheng Fei important problem, Cheng Fei is also a huge test, but the other point is, now she is the oldest national team player, with her group’s basically retired, said she sometimes felt I did not train and atmosphere since the age of the national team players are now very small, for the older athletes, injured in training athletes to recover more slowly than small. ‘
When you see Cheng Fei from the new back on the track, Advantage and Existing hearts of the greatest feeling is momentum, ‘Cheng Fei Although left the field for many years, but she was on the field momentum is still very shocking,’ Advantage and Existing said. For Cheng Fei current state, Advantage and Existing said: ‘By restorative training, Cheng Fei’s injury can be said that recovery is ideal, in the National Championships, she only made 50% strength, I believe she has much room for improvement. ‘
Cheng Fei in the preparation of which aspects need to improve the Advantage and Existing recommendations are given: ‘Cheng Fei of the basic skills which I do not worry, it is very solid, now in her injury under the conditions allowed further recovery technology, after the first show back not her best level, I believe she was through the efforts, there will be outstanding in the performance of the Universiade. ‘