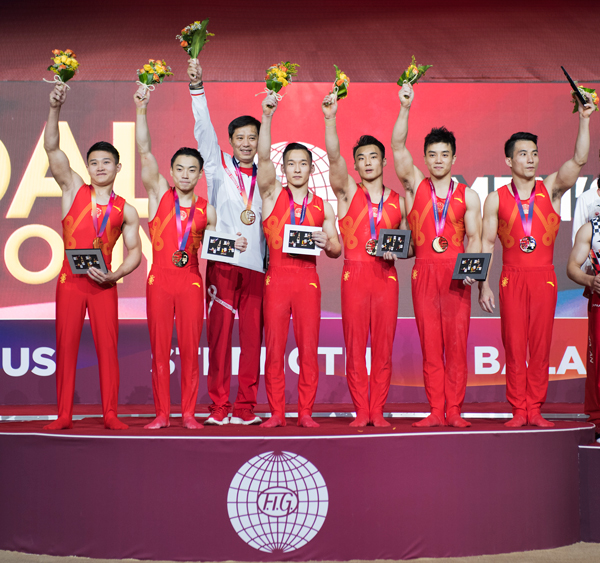 DOHA: China claimed the first gold medal of the 48th FIG Gymnastics World Championships here at the Aspire Dome on Monday evening by edging out Russia in the men’s team final in one of the closest of margins.
Chinese finished on 256.634 points, with the Russians on 256.585 while Japan took bronze with 253.744 points.
By finishing among the top three, the Asian nations thus booked their berth in the 2020 Tokyo Olympic Games.
The nail-biting contest went down to the wire with Russia’s Nikita Nagornyy, the final competitor of the evening, needing to score 13.782 on the high bar.
But he fell agonisingly short with a mark of 13.733 for an error on a handstand.
“We’re really happy because some of our gymnasts are in the World Championships for the first time, and they are already the champions,” said Xiao Ruoteng. “We are a young team, but strong. We believe in ourselves, but we can do even better. We have to teach ourselves how to (cope with) the pressure, and we to come back better, training harder at home.”
The Russians couldn’t even capitalise following Xiao’s fall from high bar where the defending All-around champion scored a relatively low 12.600.
“It does not end until the last minute, so we fight to the last minute. Even after the fall from the bar, we believed we still had a chance to win,” said Xiao team-mate Lin Chaopan.
Meanwhile, Japan finished third thus ensuring that the legend Kohei Uchimura collected his 20th World Championship medal.
“I was disappointed because our goal was take gold and also because I made a mistake during my floor exercise. I was trying very hard but I don’t know why this happened. Maybe something was happening mental. I will think about it and figure it out,” said Wataru Tanigawa.