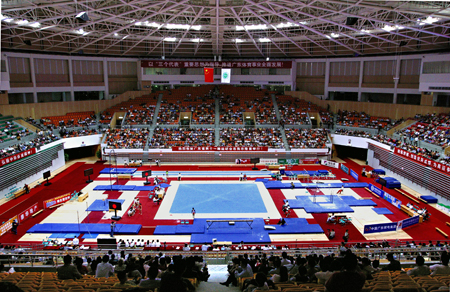 Doha (QAT), AGU Office; July 25, 2011: Organizers of the 26th World University Games (Universiade) said on Friday that the event will lack fireworks and other grand displays traditionally associated with major sporting events, as they are aiming to make it a “green” competition.
Various measures have been taken during the preparation of the Universiade to ensure that the event, which will be held in south China’s city of Shenzhen starting from August 12, will be environment friendly, Xu Qin, vice president and secretary-general of the event’s organizing committee, said at a press conference.
Xu, who is also the mayor of Shenzhen, said the event’s opening ceremony will emphasize the theme of “the return of sports.”
“No fireworks displays will be staged, and no stars or celebrities will appear at the opening ceremony,” Xu said at the press conference.
Xu said that the stage used during the opening ceremony is made of recycled plastic bottles. He also noted that 65 percent of the event’s venues have been remodeled or based on existing facilities in order to save costs and reduce the event’s environmental impact.
The newly built Universiade Village and Universiade Center will feature new energy-saving technologies and materials, Xu added.
This environmentally friendly approach will be utilized not only within the Universiade, but also in the city of Shenzhen itself. Xu said the municipal government will put 2,011 alternative-energy vehicles on the city’s streets during the 12-day event. The municipal government has also opened five new subway lines in order to lower carbon emissions.
The city has planted over 1.28 million trees since winning the right to host the event in 2007, Xu said.
About 13,000 athletes and sports officials from 180 countries and regions are scheduled to participate in the event, Hao Ping, vice minister of education, said at the press conference.
China will send a delegation of 804 people, including 505 athletes, to compete in the event, Hao said.
Source:Xinhua | Editor:Wesley
Since successfully bidding in 2007, organisers of the 26th Summer Universiade in Shenzhen (CHN) have mobilised the entire city for a Games that breaks records in terms of the number of events listed on a Universiade programme. 24 sports and 306 events are included in this year’s edition, which kicks off with the Opening Ceremony on August 12 in what has been over the past thirty years China’s fastest growing city. Shenzhen is located on the southern tip of the country and borders Hong Kong. More than 7,500 athletes from 147 countries will participate in the competition. “After four years of hard work, preparation is complete in every area,” said Mayor Xu Qin at a pre-games press conference in Beijing.
The 26th Universiade features Artistic, Rhythmic and Aerobic Gymnastics.
Artistic, including Team and Individual All-around competitions as well as Apparatus Finals, will take place from August 13 – 16 at Shenzhen’s Bao’an District Gymnasium. Details
The drawing of lots was held on July 18 in the presence of FIG Men’s Technical Committee member Istvan Karacsony (HUN), OC Director of Competition Department Mai Wuqiang, Competition Manger of Artistic Gymnastics Pan Chenfei, Deputy Competition Manager Guo Linyue and FISU Assistant to Universiade Zhao Jing. A total of 180 gymnasts from 41 nations, 132 men and 48 women, are registered to participate in the Artistic Gymnastics competitions in Shenzhen.
Rhythmic and Aerobic Gymnastics are scheduled for August 20 – 22, with Rhythmic at Bao’an District Gymnasium and Aerobic at the Futian Sports Park.
The Rhythmic tournament is comprised of All-around competitions and Apparatus Finals for Individuals and Groups, with 21 delegations having registered 32 Individual and 23 Group gymnasts. Details
For Aerobics, 147 gymnasts from 19 delegations will be on stage in Shenzhen for a first-time performance as a demonstration sport at the Universiade. Apart from Mixed Pairs, Trios and Groups, the programme also includes two new activities, Aerobic Dance and Aerobic Step, as well as a Team Ranking. Details
The drawing of lots for both Rhythmic and Aerobic were conducted on July 22 in Shenzhen, with FISU CT Chair for Rhythmic Gymnastics Josef Robert Zellweger and President of the FIG Aerobic Gymnastics Technical Committee Mireille Ganzin (FRA) present to host their respective draws. 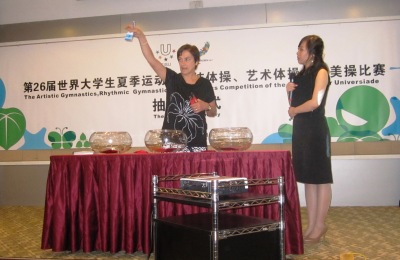