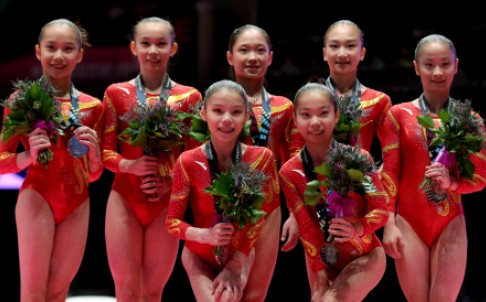 AGU Office, Doha (QAT) October 29, 2015: The Chinese women gymnasts are marching out of the shadow of their counterparts on the men’s team.
The group of Shang Chunsong, Wang Yan, Mao Yi, Tan Jiaxin, Fan Yilin overcame a sloppy qualifier to claim silver in the team finals at the world championships on Tuesday.
Compared to Chinese men, who will go for another world championship on Wednesday, the women have struggled with consistency. After winning the team gold at the 2008 Olympics in Beijing, the Chinese finished off the podium completely in London three years ago and ran a distant second to the US at last year’s worlds.
While catching the Americans, who won the event, is tough for everyone at the moment, China’s score of 176.164 was easily the second-best in the eight-team final, nearly four points clear of surprise bronze medallists Britain. At the moment, the top of the podium appears out of reach. Still, China are encouraged with less than a year to go before the 2016 Olympics.
“We knew we wouldn’t win the first place, so we were relaxed going into the finals,” Shang said.
Chinese coach Xiong Jingbin credited a mental adjustment to Tuesday’s turnaround. China plodded through qualifying, slipping off bars and looking a bit of a mess. The mistakes largely vanished in the finals.
“It all came down to the mental state, so we strengthened mental preparations [after the qualification] and told the kids to do what they have been doing at day-to-day training,” coach Xiong Jingbin said.
The girls were thrown off at the qualifier when they found the judges got moved from the floor to the benches, a change by the sport’s governing body.
“The teams were adjusting to that differently,” Xiong said. “Our girls were not used to it, but they adjusted to that by the time the finals came around.”
The Chinese team started off with solid performances on the uneven bars. Shang, Fan and Tan gymnasts soared all scoring 15.133 or higher on the apparatus that China has long dominated.
Then Wang Yan fell off of the balance beam, scoring 13.300, but it turned out to be the lowest score for the team on Tuesday night.
Unnerved by her teammate’s lapse, Shang leaped onto the beam, tumbled dazzlingly before flying off the beam like a lark. She scored an impressive 14.600.
The team moved into the second place after putting on a solid performance on the mat. The few missteps were minor and forgivable.
When Tan nailed her vault, the team put enough distance with its rivals that a second place was almost guaranteed.
“I am very satisfied with the team’s performance today,” Xiong said.
And Tuesday’s performance was so inspiring that China now has its eyes on the gold in Rio.
“In terms of difficulty, we are closing the gap with the Americans, but we fall short in how we execute the routines,” said Ye Zhennan, who leads the Chinese delegation to Glasgow. “We still have advantages in uneven bars and balance beam, but we need to close the gap with the Americans on vault and floor exercise. Hopefully, we will have a showdown with Americans in Rio.”