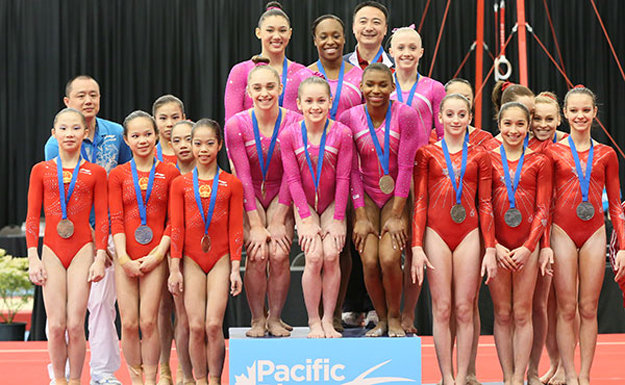 Doha (QAT) AGU Office October 9, 2014: It wasn’t entirely easy for the U.S. women’s gymnastics team to win a second consecutive world championship, but Team USA sure made it look like it.
Even though the Americans suffered some bobbles on the beam, they were so much more powerful and precise overall that they were able to win the world crown with 179.280 points — a whopping 6.693 points ahead of host China and 7.818 ahead of third-place Russia. The U.S.
Led by defending all-around world champion and two-time national champion Simone Biles and “Fierce Five” Olympic gold medalist Kyla Ross, Team USA led the standings after each of the four rotations at the 2014 World Artistic Gymnastics Championships in Nanning, China. The team was so strong that Biles needed just 8.682 points on her floor routine to secure the gold medal for the United States (she scored 15.375).
The team, which includes Alyssa Baumann, Biles, Madison Kocian, Ashton Locklear, Ross, MyKayla Skinner and alternate Madison Desch, began with exceptionally strong vault performances. Biles anchored the vault rotation by performing an Amanar for a 15.866 mark. The U.S. women followed those up with impressive routines on the uneven bars to build a 3.752 lead over the Chinese.
The balance beam rotation showed some chinks in Team USA’s armor as Ross wobbled following a side somersault and Biles also had a huge bobble. Still, no other country could come close to catching up to the Americans.
On the final rotation, floor exercise, Team USA really showcased its exceptional power. Skinner opened her routine with a layout and tuck double-double that were so huge that even though she stepped out of bounds later in the performance she still garnered a 14.666 score.
Appropriately, Biles closed the competition, and her upbeat routine, which scored a 15.375, was practically a victory lap.
Team USA won the world championship team title in 2011 when the event was held in Tokyo. At the last world championships in 2013, Biles and Ross finished 1-2 in the all-around competition. The women’s all-around competition in Nanning is set for Friday.
Next up at the 2014 World Artistic Gymnastics Championships is the men’s all-around competition Thursday.