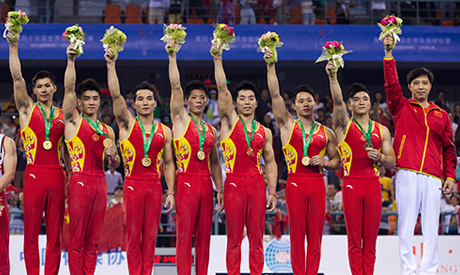 Doha (QAT) AGU Office October 08, 2014: The 2014 World Artistic Gymnastics Championships will be held in Nanning, China at the Guangxi Gymnasium from 3–12 October 2014. The competition will be the fourth time a World Artistic Gymnastics Championships has been held in the continent of Asia
. Host China extended its men’s gymnastic dynasty, by the closest margin in at least the last 25 years, at the World Championships on Tuesday. For nearly six straight years, China has beaten Japan in the Men’s Team competition during the Gymnastics World Championships Chinese needed a 15.867 on their 18th and final routine to pass Japan, which had led after each of the first six rotations in rival territory in Nanning.
Zhang Chenglong delivered a spectacular high bar performance and was rewarded with a 15.966, the highest score among all 144 routines on Tuesday by 0.066 pts.
Zhang, the 2010 World high bar champion, had scored 15.166 in qualifying last week. The top high bar score among all gymnasts in qualifying was a 15.6.
The one tenth margin of victory was the closest in a men’s or women’s Olympic or Worlds team final under the new scoring system implemented in 2006.
China kept its streak going. It has won every Olympic and World Championship gold medal since Japan’s last gold at the Athens 2004 Olympics. China hadn’t lost at the World Championships since 2001.
The U.S. came from behind Great Britain after four of six rotations to win bronze at a second straight World Championships, by more than a point over the Brits. The U.S. fell to fifth at the 2012 Olympics in between the two Worlds bronze medals.
In Nanning, the Chinese fell behind on the first rotation, counting a fall on floor exercise. They stood in fifth place after one rotation and sixth after two rotations.
Japan suffered another disappointment, winning silver behind China for a fourth straight World Championships. The Japanese also won silver at the 2008 and 2012 Olympics.
The last time Japan won the World Championship was at the tail end of its dynasty in 1978.
“We felt we gave it all we could,” Japan’s four-time reigning World all-around champion Kohei Uchimura said, according to The Associated Press. “Zhang’s performance was spectacular. We gave it 100 percent, and while we can’t be satisfied with the result we can be pleased with our performances.”