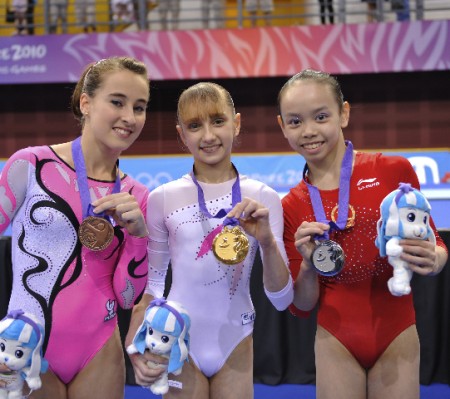 Youth Olympic Games – Singapore August 20, 2010: If you had watched the Women’s Artistic Gymnastics Qualification round on Tuesday and taken a look at the results, you might not have been surprised by the attribution of last night’s All-around Final podium ranks.
However, if Carlotta Ferlito (ITA) had been told beforehand that she would win the Bronze medal and Natsumi Sasada (JPN), 10th in Qualification, that she’d improve her score by 1.8 points, reaching out for a medal only to be pushed back into a measly fourth place, they would probably not have believed it. Moreover, who would have guessed that Ana Sofia Gomez Porras of Guatemala would even top her phenomenal sixth rank of the preliminaries, finishing fifth ahead of Romania’s Diana Bulimar?
This Final was an action-packed thriller and left everything possible until the end!
Everything? Maybe not quite everything. Viktoria Komova of Russia forged a place for herself during the Qualifications, leaving the rest of the field in her wake. Last night, she continued performing in a class of her own, setting the bar high from the outset with a fantastic opening on Vault. From one apparatus to the next, Viktoria built up her lead to an ultimate 2.750 point advantage over Tan Sixin (CHN). The reigning Junior European Champion gave a spectacular show of impressive skill and talent, displaying complex routines executed with grace, precision and style. Viktoria’s performance culminated in her very special and entertaining Floor routine, a true highlight at the end of the evening that scored a fantastic 14.900! In the end the young Russian had topped her qualifying score, gaining an overall 61.250. The Gold was hers!
China’s Tan Sixin started off really well, significantly improving her mark on Vault for second place behind Viktoria. Though she failed to repeat her qualifying performance on Uneven Bars and Beam, Tan never slid down from this position. On Floor, the hard working and dedicated young gymnast flaunted her full potential, displaying a highly physical and simply wonderful routine that was full of life. She was rewarded with 14.400 points and a Silver winning total of 58.500.
Carlotta Ferlito (ITA), who was a true dark horse in the Qualifying rounds on Tuesday in third, entered the competition hall with one thing on her mind for this Final: the Bronze medal. She seemed relaxed in the beginning, easing herself into third rank with her Vault exercise. But an unfortunate event would change the tide: a disappointing 12.750 on Uneven Bars set her back into sixth position. The coveted medal seemed out of reach. But Carlotta was quick to redeem herself from the setback, performing a well-controlled, technically clean and graceful exercise on Beam; she was back in the game! Everything ultimately depended on the Floor performances of the top qualifiers and looking at Natsumi’s score, Carlotta, performing third to last, needed a minimum of 13.900 points to top the Japanese and grab that medal. The time needed by the judges to release her score must have seemed like ages to Carlotta, who had landed a 13.500 on Floor in Qualification. When she finally saw the 13.950 appear on the score board, adding up to an overall 55.350, she couldn’t hold back the tears; the pressure vanished.
Natsumi, on the other hand, learned a hard lesson last night. Having upped all her scores with regard to the preliminaries, the young Japanese envisioned herself on that podium with a total of 55.100 points. She was, however, left empty-handed this time around, but she’ll have many more chances to come back big in the future.
Guatemala’s Ana Sofia Gomez Porras will remember the first Youth Olympic Games as her chance to show off her tremendous talent and potential on the international Gymnastics scene. Stepping out of the shadows, the young gymnast from the small Central American country proved that it’s possible for nations emerging in gymnastics to prepare talented gymnasts for international competitions. Ana Sofia finished on a fantastic fifth rank (54.050) and can be very proud of her achievement in Singapore! We look forward to seeing her again in the Beam and Floor Finals on Sunday.
Source: FIG 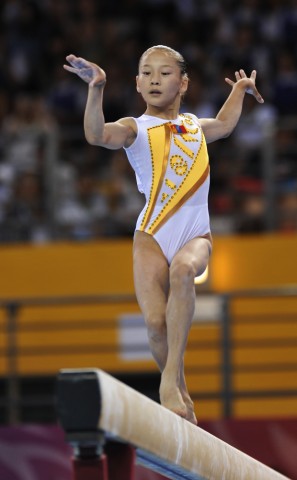