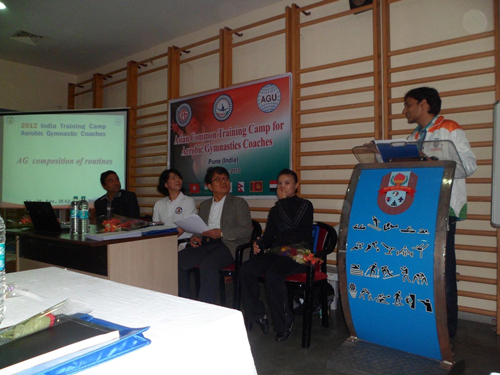 Doha (QAT) AGU Office January 03, 2013: The AGU Common Training Camp for Aerobic Gymnastics Coaches has kicked off at Pune (India) on 16th December, 2012. Mr Kaushik Bidiwala, the Secretary General of Gymnastics Federation of India inaugurated the camp along with an introductory session by the expert.
The camp is being headed by Ms. Young Hee Song of Korea as expert along with Mr. B K Chung and Ms. In-Young Choi as co-experts. Experts/Coaches and Gymnasts from 7 countries namely Sri Lanka, Hong Kong China, Bangladesh, Yemen, Nepal, Korea and the host India are participating in this Camp.
The camp is being conducted at the Gymnastics Hall in Balewadi Sports Complex in Pune which is one of the most modern sports infrastructures in India and which has hosted the Youth Commonwealth Games in 2008. It will continue for 4 days until 19th December, 2012.
The Experts began the course with briefing on the Aerobic Code explaining various element groups and routines and then got off to the training hall for displaying the 10 fitness tests for assessing the gymnasts’ fitness. The post lunch session started with a theory lecture on the ideal body movements and execution and thereafter the experts brought all the coaches and gymnasts moving on music beats for construction of Aerobic Movement Pattern.
This camp is expected to build up strong co-operation between the 24 participant coaches, 9 of which are from foreign countries and 15 from India. These coaches along with 20 odd gymnasts will largely benefit from the Experts’ vast knowledge and experience in Aerobic Gymnastics. 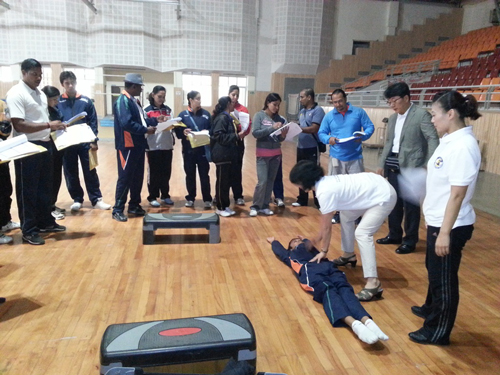