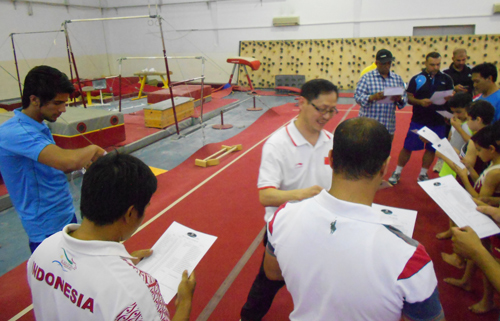 Doha (QAT) AGU Office: July 29, 2013: A common training camp hold during July 01—07, 2013 in Amman – Jordan under the direction of Mr.  Wei Xubo with the participation of 25 persons included 12 coaches and 13 gymnasts from 10 Countries as the following: Afghanistan, Saudi Arabia, China, Iraq, Philippines, Singapore, Indonesia, Qatar, Lebanon and Jordan.
At this occasion we want to welcome Afghanistan Gymnastic Federation for their first participation to the AGU development project in wishing good continuity in the development of gymnastics in their country.
The Camp program contain 5 sessions practice and 2 sessions of  Lectures for  MAG training.
The Opening ceremony was supervised by Mrs. Nuha Hattar, the General Secretary of Jordan Gymnastics Federation who has made warmly welcome speech to the Participants.
During the “practice” sessions, the expert had organized the Training in the gym with some technique points including the training method, typical element and some steps etc.
Mr.  Wei Xubo conduct the “Theory” session in the meeting room, with some projection with computer, and projector, introduced the basic of MAG training, explained some new ideals and senses of GA, given a lots of  recommendations and advise with new technique, the ways to correct the technical mistake in the gymnast training to the coaches.
The Camp achieved the General Objective of “to Exchange the experiences in coaching and Knowledge in Men’s Artistic Gymnastics, to Enhance the cooperation and communication of coaches and gymnasts, to Set up a good relationship between coaches and gymnasts within Asian Continent”.
AGU congratulate Jordan Gymnastics Federation for the success of the training camp and specially the secretary general Mrs. Nuha Hattar for her cooperation. 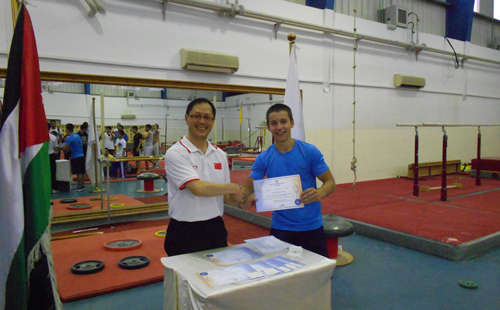