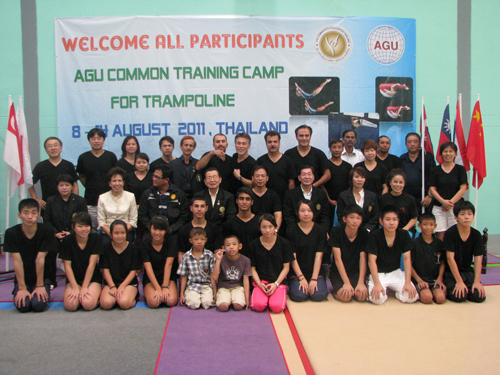 Doha (QAT), AGU Office August 19, 2011: AGU organized the first project for this year concerning development of coaches in Asia under AGU development project 2011 and the first discipline is Trampoline Gymnastics which is Olympic sport and not enough developed in whole Asia. A common training camp was organized in Bangkok – Thailand during the period 08-14/8/2011 under the conduct of Mr. Chen Qiln from China one of the best coach in the world accompanying to one demonstrator gymnast Mr.ZAN JIE (CHN). A big thank to Thailand Gymnastics Association for the success of this event and specially to President Mr. Sawat Sopa who never ceases to help AGU and all Asian countries to develop gymnastics.

8 countries was present in this event which is a respectable number such as:

The event was organized in JRC Gymnastics Center with 2 sessions per day which contain theory and practical lectures concerning methods of teaching basic skills, methods of elements combinations, methods of difficulty elements and methods of difficulty elements and safekeeping . Development of trampoline coaches in very important following a number of injuries and law suits caused by insufficient supervision and inadequate training, but trampolining is now mostly conducted in specialist gyms with certified trainers. And since trampolining became an Olympic sport in 2000, many more countries have started developing programs and Japan and China are already producing very competitive athletes.

About Trampoline
This is a spectacular sport that can require a top trampolinist to reach heights of 10 metres whilst  performing multiple somersaults and twists. As well as being a sport in its own right, it is widely recognised as a training tool for many other gymnastic disciplines and sports such as diving and freestyle skiing.
Trampolining can be seen as a reflection of man’s desire to defy gravity. Early civilisations devised various methods of sending a person into the air, such as using outstretched animal skins to throw them up and safely catch them on their descent. Circuses have used a number of methods to propel performers into the air for a variety of somersaults.
An Olympic discipline, the first British Olympians in Trampolining were Lee Brearley in the Men’s and Jaime Moore in the Women’s event at the Sydney 2000 Games.
Disciplines:
Individual, Synchronised and Double Mini Trampoline (DMT).
A Trampoline (individual or synchronised) competition is made up of three routines/rounds: Compulsory, Voluntary (both preliminary rounds) and Final Voluntary Round. Each routine is made up from 10 skills and must start and finish on the feet.
For Double Mini Trampoline (DMT) competition there are four passes, the first two in the Preliminary rounds and two in the Final round. Each pass consists of one skill performed in one of two areas, Mount or Spotter plus a dismount skill making two skills per pass.
Competitive trampoline routines consist of combinations of 10 contacts with the trampoline bed combining varying rotations, twists and shapes with take-off and landing in one of four positions:
• Feet
• Seat
• Front
• Back
A routine must always start and finish on feet. In addition to the 10 contacts with the bed in a routine, competitors are permitted up to one “out bounce”, a straight jump to control their height at the end of a routine, before sticking the landing. The trampolinist must stop completely – this means that the bed must stop moving as well – and they have to hold still for a count of 3 seconds before moving. 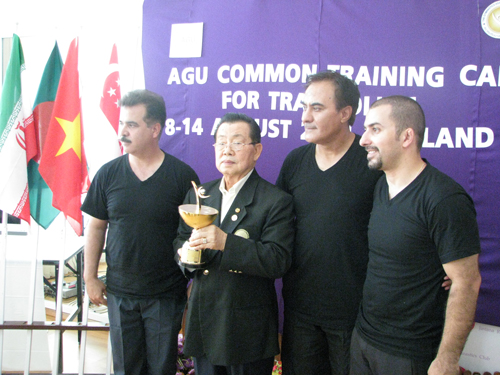