condolences to the family and friends of Yukio Endo! 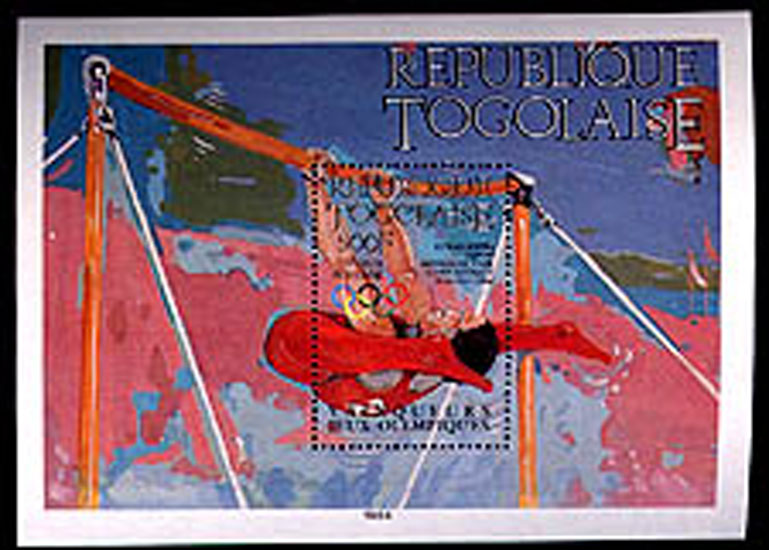 Wednesday, March 25 the first Japanese winner of an All-Around Olympic gold medal at the 1964 Tokyo Olympic Games, the artistic gymnastics legend Yukio ENDO, died at the age of 72 years after a long fight with esophageal cancer.
Altogether Endo won 17 world and Olympic medals in his career, and took part of five gold-medal Japanese teams that dominated the 1960s, winning Olympic team titles in 1960, ’64 and ’68, and also the world team titles in 1962 (Prague) and 1966 (Dortmund).
Generation of young gymnasts around the world know his creation at horizontal bar, the forward “Stalder”, named “Endo” skill …
Yukio Endo (3rd from right) as a co-reporter of Japanese Television NHK
at the World Championships 1991 in the Hoosher Dome of Indianapolis, USA

The Biography of a Nonsuch
* Born in Northern Japan on January 18, 1937, Yukio Endo’s family ran a pharmacy in Akita City.
Yukio Endo, (1970)
– one of the impressively character of international sport

‘Endo’ skill at highbar on a stamp of Togolese Republic   He lost his mother to illness when he was in the 4th grade and to overcome his sorrow, he would race anything that moved, for he was a nimble runner.
At that time, he attended an elementary school in the city where he would eventually attend junior and senior high school.
Inspired by his teacher, Yukio took up gymnastics during his second year in junior high.
In 1952, Japan ranked 5th in the Team Competition at the Helsinki Olympics, in which Takashi Ono from the same prefecture participated.

Yukio renewed his resolution to continue gymnastics; he entered the Tokyo University of Education and graduated in 1959.
While at the university, Yukio was coached by Mr Akitomo Kaneko. He participated in various university level gymnastic competitions, topping off in 5th place in the Individual All-around.
In 1960, while an assistant instructor of physical education at Nihon University, he was selected to be part of the Japanese National Team for the 1960 Olympic Games in Rome; those Games would be his international debut. The Japanese Team copped the Gold! Yukio placed 4th on Horizontal Bar, 5th on Vault and 5th in the Individual All-around.

At the 15th World Championships in Prague, Yukio won a Gold in the Floor exercises, a Silver in the Individual All-around, Rings and Horizontal Bar events and a Bronze on Vault and Parallel Bars, while the team took the Gold.
Endo as the Japanese national coach at the 1974 worlds in Varna; right: Mitsuo Tsukahara

Endo’s biggest triumph:
Olympic all-around gold medallist 1994 in Tokyo, beating Shakhlin (URS), Tsurumi (JPN) and Lissitzki (URS)) on second places    The climax of his gymnastics career came in 1964 at the Tokyo Olympic Games when his team captured the Gold and Yukio won the Individual All-around and Parallel Bars competitions, with a Silver on Floor for good measure.

In 1966 at the Dortmund World Championships, when Japan walked away with the Team Gold, Yukio claimed a Silver on both Floor and Horizontal Bar.
The Mexico Olympic Games in 1968 marked his last Olympic appearance; the Japanese team won the Gold and Yukio took an ultimate Silver on Pommel Horse.
Retired from active duty, Yukio busied himself coaching young aspiring gymnasts while teaching at Tokyo’s Nihon University as a professor of physical education.
The international gymnastics family extends its sincere condolences to the family and friends of Yukio Endo!
* Source: fig, “Flick Flack” and others

condolences to the family and friends of Yukio Endo!