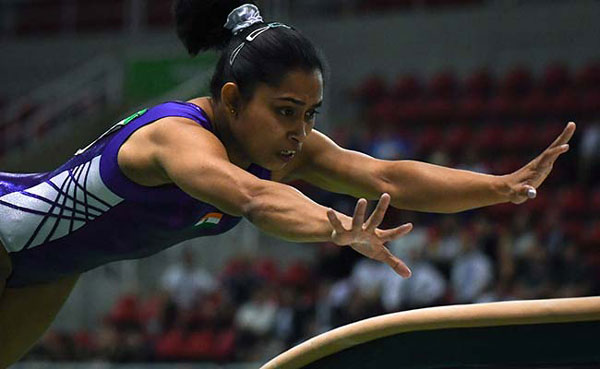 AGU Media, DOHA (QAT): Injury to India’s Olympic gymnast Dipa Karmakar may rob her dream to compete at the FIG World Championships in Montreal, Canada, from October 2 to 8.
The 23-year-old, who finished fourth, at the Rio Games last year, recently underwent Anterior Cruciate Ligament (ACL) surgery in Mumbai.
“Dipa’s participation in the worlds is uncertain. She is undergoing a rehab which’ll continue for two-and-half months,” said her coach Bisweshwar Nandi.
Dipa, who hails from the Indian state Tripura, became the first female gymnast to represent her country at the Olympics. She scored an average of 15.066 points, a mere 0.15 less than Switzerland’s eventual bronze-winner Giulia Steingruber (15.216).
Infighting between two groups to control the Gymnastics Federation of India is not a healthy sign for the sport’s development in the country.
Though Dipa Karmakar’s fourth-place at the Rio Games last year has given a boon to the sport, it has been nearly three years since the last the National Championships were held.
“Without a clear forward-looking plan of action, Indian gymnastics isn’t going anywhere. The faction rivalry is only damaging the sport’s growth in the country,” said Asish Kumar, who won the first medal for his country in the sport at an international competition.
Dipa’s Olympic success may be positive news for gymnastics which now attracts a lot of youngsters. However, athletes and coaches pledged the country’s sports ministry and the Sports Authority of India to take over the wrangling body until one federation is formed which can work for the sport’s development.
Unable to compete in a sizeable number of competitions have already posed a big problem to several promising gymnasts in this south Asian nation.