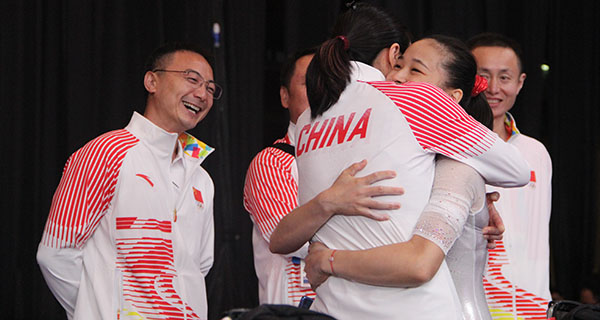 The women bagged four gold, two silver and one bronze medals while China ended the artistic competition on Friday with combined 18 medals including eight gold, five silver and five bronze medals at the JI Expo auditorium.

It was an impressive show by China and showed they are prepared to revive their lost glory at the international level after a rather disappointing show in 2016 Rio Olympics, where the team finished third.

“It was all about teamwork,” said Chen Yile, who won three gold including team, individual All-Around and balance beam, where she tallied 14.600 points ahead of her team-mate Zhang Jin, who won bronze (13.325).

Vault was the only event where the women missed out on a podium finish, with South Korea’s Yee Seo-Jeong, Uzbekistan’s Oksana Chusovitina and North Korean Pyon Re-Yong shared the honours.

The 16-year-old, who finished fifth on the floor exercise later in the day, showed determination to polish her skills for new high.

“I’m quite aware that vault and floor can always weigh me down. I will have to work hard on these apparatuses,” said Chen.

Meanwhile, coach Qiao Liang, who joined the team last month, said he was “very, very touched by the girls’ performance”.

In fact, there has been a marked improvement in their performance after Qiao’s appointment.

Asked if the same team would be participating for the FIG World Championships in Doha in October, he added, “Not sure. We will have to sit back and analyse. May be, two or three from this group will be picked.”