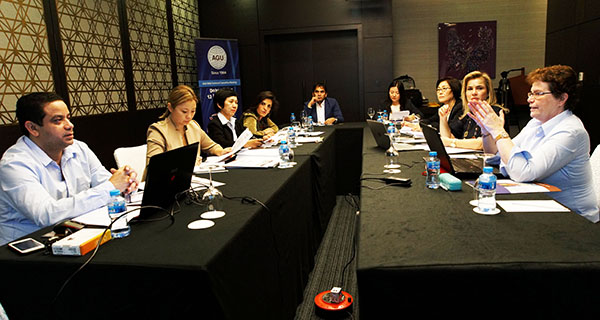 Doha (Qatar), AGU Office: The AGU WAG Technical Committee, which met here last Saturday, felt there’s an urgent requirement of qualified judges if they want to bring the AGU competitions at par with the international ones.

The meeting, which was also attended by AGU’s special guest from FIG Donatella Sacchi, was opened with a small review on the last year’s events by WAG TC President Ms Radiye Kizilgun.

The progress may have been impressive in terms of organisations, but the committee felt there is a serious need of more judges and coaches in the various zones.

“We had faced serious issues on scoring at the Senior Asian Championships in Bangkok, Thailand, last year,” said Radiye.

Radiye’s main concern was the absence of qualified officials, which is a big drawback for the sport’s development in the continent.

FIG WTC Chairman Donatella, one of the finest experts, explained that the problem was due to the lack of qualified judges and coaches.

It was decided Radiye will prepare a tentative schedule and strategy, with Donatella chipping in with her expertise.

“Opportunities are rare or limited for Asian coaches and judges as they are not well prepared and also most of them lack the English knowledge, which is one of the four FIG official languages,” said Donatella.

“The respective federations should send only the best one for the courses. If they want to attend the FIG programmes just for the sake of it, it won’t really help,” the Italian asserted.

“We’ve more events throughout the year than Africa, but there’s a lack of balance in terms of judges’ courses. We’ll take up the issue with the FIG at the next month’s Executive Committee,” said Anis.

The AGU President Abdulrahman Al Shathri, who made a brief presence at the meeting, thanked Donatella for accepting the invitation to visit Doha.

He also requested Donatella to help and guide the WAG TC on how it can improve further.

The WAG TC also finalised on the distribution of functions of its members for the 15th Junior ART Asian Championships in Jakarta, Indonesia, in April.