Dong Dong and Tu Xiao, still on top of the world in Synchro Trampoline 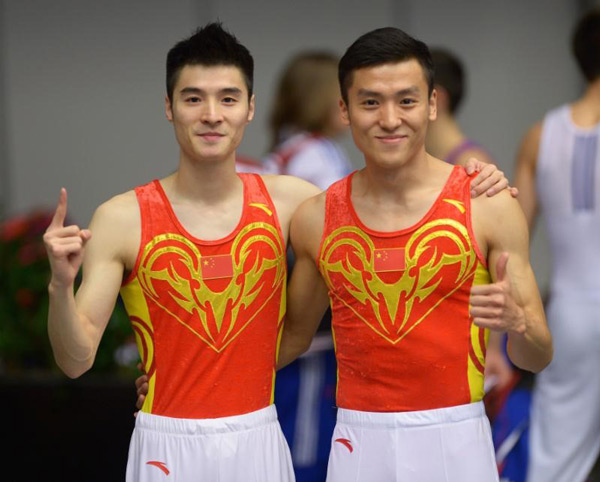 Trampoline
Fourth Synchro title for golden boys Dong and Tu
When 2012 Olympic champion Dong Dong and 2014 World champion Tu Xiao pair up, the result has most often been a gold medal. Saturday’s Men’s Synchro final was no exception: Already three-time World Synchro champions (2010, 2011 and 2014), Dong and Tu bounded to a fourth World title, writing another golden chapter in their long and fruitful partnership.
Faced with the textbook performance by the excellent-under-pressure Dong and Tu, top qualifiers Sergei Azarian and Mikhail Melnik (RUS) cracked, allowing Uladzislau Hancharou and Nikolai Kazak (BLR) to jump off with silver for the second straight year.
France, having already ingested two chocolate medals in Women’s Tumbling and Men’s Team Trampoline, can rejoice with Sebastien Martiny and Allan Morante, who gave their countrymen something to cheer about with bronze.
There have been signs so far in Odense that the Trampoline dynasty 2012 Olympic champion Dong Dong and 2014 World champion Tu Xiao had helped build was, if not crumbling, at least getting a little rusty: After an unexpected silver medal in the men’s team event and Tu’s early exit from the Men’s competition at the hands of a younger teammate, the duo entered Saturday’s Men’s Synchro final on the defensive. All that can now be counted as now water under the trampoline.

Golden rebound for Zhong and Li
With a routine judged the most daring as well as the most polished, Zhong Xingping and Li Dan rose easily above their competition in Women’s Synchro finals. Already golden in 2009 and after silver in 2013, Zhong and Li kept the World title, won by Liu Lingling and Li Meng in 2014, under the Chinese flag. Elegant Belarussian duo Tatsiana Piatrenia and Hanna Harchonak took silver for the second consecutive year, while Ukraine’s Maryna Kyiko and Nataliia Moskvina demonstrated excellent Synchronisation to earn bronze.

Tumbling
Jia makes it an individual triple
Once again, no one could touch the all-powerful Jia Fangfang (CHN), who has dominated women’s Tumbling since making her World debut four years ago. After an aborted run kept the 21-year-old off the podium last year in Daytona Beach, Jia put on a tour de force in Women’s final in Odense to take her third World title. Her extraordinary difficulty lifted her above Britain’s Lucie Colebeck, whose silver is redemption for her own rotten day in Daytona in 2014. Multiple World champion champion Anna Korobeinikova (RUS), 32, and veteran Chen Lingxi (CHN) shared the bronze.

Russian men put on a show
China and Russia have exchanged the World title in Men’s Tumbling for the past decade, but 2015 is decidedly the year of the Russians: Andrey Krylov, Tagir Murtazaev, Timofei Podust and Gregory Noskov electrified the Arena Fyn with their display of gasp-worthy aerial pyrotechnics. Russia’s best came first in the lineup in the form of 2007 World champion Krylov, back after serving a two-year suspension for ingesting the banned stimulant methylhexaneamine. 2009 World champion Murtazaev and Timofei Podust also did their part to keep the team gold in Russia.
China’s lineup included reigning World champion Yang Song, but even he couldn’t make up for teammate Meng Wenchao’s fall. China (Yang, Meng, Liu Longji and Zhang Kuo) salvaged silver based on the difficulty of their passes, while Britain (Kristof Willerton, Michael Barnes, Elliott Browne and Abdullah Izzidien) won bronze, repeating their result from 2013.

Double Mini-trampoline
Gold — finally! — for Austin White
With three individual World silver medals already among his collection, 27-year-old Austin White finally hit the jackpot Saturday. The Californian did everything he could in his two passes, which left the public breathless, not only because White threw triple saltos like they were nothing but because he landed them like a cat. Even double World champion Mikhail Zalomin (2013-2014) wasn’t able to match White, and left with silver this year. Australia’s Matthew Weal played it safe with two less spectacular exercises but his high execution score in both won him the bronze over daredevil Daniel Perez (ESP), who threw a rare quadruple salto but put his hands down on the landing.

Dong Dong and Tu Xiao, still on top of the world in Synchro Trampoline