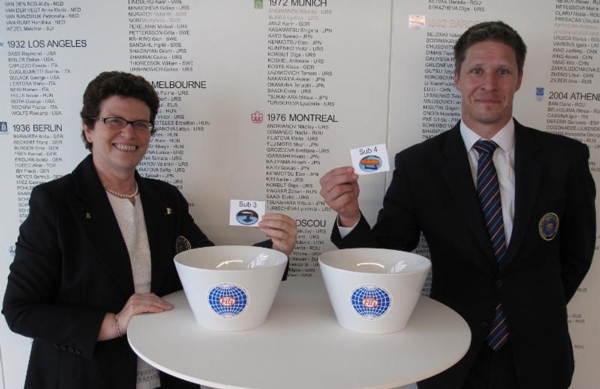 Doha (QATAR), AGU Office: The draw for the 2017 FIG World Artistics Championships, which will be held in Montreal, Canada, was held at the FIG headquarters in Lausanne, Switzerland, on Wednesday in the presence of Donatella Sacchi, President of the FIG Women’s Artistic Gymnastics Technical Committee, and Jani Tanskanen, Athletes Representative for Men’s Artistic Gymnastics.
The competition will take place at the iconic Olympic Stadium from October 2-8.
“The draw is the first step on the road to the countdown. All participating nations eagerly await the results as it’ll help the coaches plan training sessions, especially for those who’re coming from far away so they can adapt to the time difference,” said Sacchi.
Olympic and world champions Oleg Verniaiev (Ukraine), Max Whitlock (Great Britain), Eleftherios Petrounias (Greece), Kenzo Shirai (Japan), Epke Zonderland (the Netherlands), Arthur Zanetti (Brazil), Yang Hak-seon (South Korea), Marian Dragulescu (Romania), Denis Abliazin (Russia) and Zhang Chenglong (China) are some of the top names to participate.
“We’re starting a new Olympic cycle and the champions will probably be seen again at the Tokyo 2020 Games. This draw is the informal beginning of the Worlds,” added Arturs Mickevics, President of the Men’s Artistic Gymnastics Technical Committee.
Meanwhile, all eyes will be on the Japan’s All-around world and Olympic champion Kohei Uchimura, who six world titles and two golds at the previous two Games. He will hope to extend his domination, pushing his record for consecutive titles.
As for the women, a new world champion will emerge in the individual All-around after American Simone Biles decided to take a break from the event.
However, the attention will be on Uzbekistan’s 42-year-old Oksana Chusovitina, who is still contesting in the elite group 25 years after winning a team gold at the Barcelona Games in 1992.
Romania’s Catalina Ponor, triple Olympic gold medallist from 2004, will be another ‘veteran’ star who can throw challenge at her much younger competitors.
For the first time in its history, the tournament will feature Gymnastics Ambassadors where the winners of the individual All-around will receive gold medals from the legendary Nadia Comaneci, official spokesperson of the event, and Kyle Shewfelt, the only Canadian to have been crowned Olympic champion in Artistic Gymnastics (floor gold at the 2004 Athens Games).