AGU office – Doha (QAT) October 14, 2010: Gymnast Elaine Koon won a gold and a bronze medal on the final day of the 2010 Commonwealth Games today.
She won her gold in the individual (hoop) with 25.300 points at the Indira Gandhi Stadium.
Earlier in the day, in the individual apparatus (rope), Elaine went on to win the bronze, collecting a total of 24.950 points.
It was a fruitful outing for Elaine in this Games. Yesterday, she won the bronze in the individual women’s rhythmic gymnastics all around.
“I am so happy, I can’t believe it. Today is my best event ever,” a jubilant Elaine said after winning the gold.
Read more: Delhi Commonwealth Games: Elaine Koon strikes gold in rhythmic gymnastics.

MALAYSIA will be hoping for another strong performance from new rhythmic gymnastics star Elaine Koon in next month’s Guangzhou Asian Games to continue the sport’s revival in the country.
Gymnastics – both rhythmic and artistic – has been losing its shine of late, with fewer athletes making the step up to the elite teams.
In fact, only four gymnasts will be competing in the Asiad this year – a clear indication of the lack of quality and quantity in both the men’s and women’s squads in the national team.
The others picked for the Guangzhou Asiad, from Nov 12-27, are Nur Hidayah Abdul Wahid and two artistic gymnasts – Lum Wan Foong (man) and Cheong See Teng (woman).
Malaysian Gymnastics Federation (MGF) secretary N. Shanmugarajah was elated with Elaine’s exploits in the recently-concluded New Delhi Commonwealth Games.
She became the first Malaysian to win an individual gymnastics gold medal at the Games. She also ended the country’s 12-year wait for a gold medal in the Games after the extraordinary feat of the rhythmic girls, led by Thye Chee Kiat, at the 1998 Games in Kuala Lumpur.
“Elaine did the country proud and she has a bright future ahead of her,” said Shanmugarajah. “The standard of competition in Asiad is higher but we hope she will be able to put up another strong performance.
“We have named Elaine and Hidayah for the Asiad. We could not form a team because there is no one else in their class.”
He was referring to Melbourne Commonwealth Games silver medallists Durratun Nasihin Rosli, Chrystal Lim, Foong Seow Teng and Jaime Lee.
“Elaine is our new star now and she has done well to reignite interest in the sport and we hope she will keep the momentum going in Guangzhou.
“It will be tough at the Asian level as the sport is dominated by the Chinese but we hope she will fight for at least a bronze medal,” said Shanmugarajah.
Malaysian gymnastics has failed to hit the heights since the silver medal-feat of men’s artistic gymnast Ng Shu Wai at the 2006 Doha Asian Games.
But now there is hope, thanks to Elaine’s exploits in New Delhi.
Shanmugarajah said that top woman artistic gymnast See Teng was also capable of making a difference for Malaysia, although her participation is in the balance.
See Teng had to withdraw from the Commonwealth Games after injuring her foot on the eve of competition.
“She is one with great talent but, unfortunately, she was injured.
“Our women’s artistic gymnastics team did relatively well at the Commonwealth Games but the presence of See Teng would have added more depth,” he said.
“We will wait for feedback from the doctor on See Teng’s condition. If she is unable to go, we will replace her with Tracie Ang.”
Shanmugarajah also said that he would appeal to the Olympic Council of Malaysia (OCM) to send a women’s artistic team to Guangzhou.
If successful, then aspiring youngsters Farah Ann Hadi, Chan Sau Wah and Noor Hasleen can use the Asiad as a springboard to future success.
“The Asiad would be a good exposure for these youngsters. They will gain valuable experience. It will prepare them for next year’s SEA Games (in Indonesia),” he said.
“The Asian Games will be a great platform for us to test out these youngsters. I hope our appeal will be considered.” 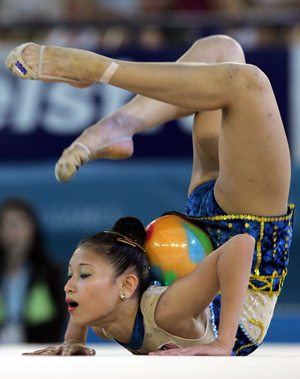