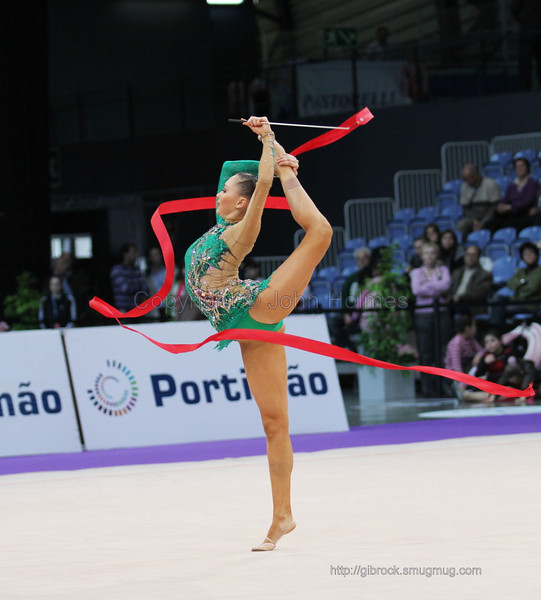 Doha (QAT) / AGU Office, January 18, 2012: The International Gymnastics Federation (FIG) confirmed the Rhythmic qualifiers for the 2012 London Olympic Games following the second and final qualification event on Tuesday.
Twenty-four places were available for Individuals and 12 for groups of six, with gymnasts having two opportunities to qualify their NOCs – at the 2011 World Championships in Montpellier (FRA) and the Visa International Gymnastics this month in London (GBR).
Places for five Individuals who have qualified in London, namely Anna Alyabyeva (KAZ, Ganna Rizatdinova (UKR), Carolina Rodriguez (ESP), Chrystalleni Trikomiti (CYP) and Jana Berezko-Marggrander (GER) are nominative.
One spot is reserved for the host country, Great Britain, and three places are set aside for continental balance and universality. These places will be nominated in due course by the FIG Executive Committee and the Tripartite Commission respectively.
In the Groups category, with a total of 12 available places, Italy, Russia, Bulgaria, Belarus, Japan, and Germany had secured OLympic berth at the 2011 World Championships, while Spain, Ukraine, ISrael,and Greece qualified in London.
Great Britain is guarantedd the host country place and one spot, which will be allocated in due course by the Executive Committee, is reserved for continental balance.
List of Rhythmic Gymnastics 2012 Olympic qualifiers

The Visa International Gymnastics continued on Monday with the first day of Qualifications for Rhythmic Gymnastics Individuals as well as Groups at London’s North Greenwich Arena. Although the discipline will be staged at Wembley Arena at Games time, the Test Event and 2nd qualifier was held at the same venue as the Artistic and Trampoline Gymnastics competitions last week.
Twenty-seven Individuals had secured participation rights at the 2011 World Championships in Montpellier (FRA) for this event, with World Champion Evgenia Kanaeva (RUS) and World Bronze medallist Aliya Garaeva (AZE) having already qualified but opting out. 2011 runner-up Daria Kondakova (RUS), however, followed the invitation to compete in an aim to test the London waters, adding prestige to the event.
Guaranteed a place in the Olympics as the host nation, Great Britain is represented at the Test Event by Francesca Jones.
In total, twenty-three Individual gymnasts representing as many countries compete in London for the five remaining Olympic spots to be determined at the end of the qualifying round on Tuesday, all of whom are eager to join the line-up of fifteen NOCs who have already secured their Olympic spots in Montpellier.
The first leg on Monday featured Individual gymnasts on Hoop and Ball, with Kondakova taking the overall lead after the two rotations. She impressed with two excellent routines, pulling off fabulous moves with great expressiveness and good use of the music.
Ukraine’s Ganna Rizatdinova was the high scorer on Ball with a beautiful routine performed to a slow atmospheric melody. The 18 year old gymnast wowed the crowd with her elegant body movements, difficult rotations and balance. She is currently in second place, followed by Anna Alyabyeva of Kazakhstan.
Alyabyeva gave a fantastic performance today, impressing with excellent apparatus handling, high throws and other risk elements. She commented on her performance: “I feel very happy. It went wonderful.” On how she felt going into the competition she said: “I felt scared because only five people qualify and that made me nervous. It made me feel like I was already at the Olympics.”
Chrystalleni Trikomiti of Cyprus currently sits in fourth place with Spain’s Carolina Rodriguez on her heels. Rodriguez’ fans in the crowd cheered for her vocally, appreciating a performance that included risky elements on Hoop and beautiful rolling movements on Ball. Rodriguez stated on the competition: “It was an important day for me, not only because I am getting close to qualifying but also for the first time my parents, who are hearing impaired, attended such an important event in my gymnastics career. I have also been struggling with a foot injury but I said to myself at the beginning of the competition that I have to pull through because of all the sacrifices I’ve made. If I was go to the Olympics I will be absolutely thrilled because my last Olympics was eight years ago and I will probably retire after this Olympics.”
Jana Berezko-Marggrander of Germany takes up the last qualifying position for now, but the gymnasts will have to prove their skill again tomorrow in rotations three and four on Clubs and Ribbon.

In Groups, nine countries are eligible to participate at the Visa International Gymnastics. However, the 2011 World Champions of Italy, who are already qualified for the Games, decided not to attend.
Great Britain as the host country is allocated a spot at the 2012 London Games. To ensure the quality of any Group representing Great Britain is credible and provides a lasting legacy for the future, however, British Gymnastics (BG) and the British Olympic Association (BOA) agreed a clear selection criteria and performance standard which must be achieved at this event before a nomination would be made for inclusion into Team GB.
Groups from the Ukraine, Switzerland, France, Israel, Greece, Spain and Azerbaijan are in the running for the four Olympic spots up for grabs.
In the first heat on Monday, Groups performed on five Balls, with Spain taking the lead and the Ukraine and Israel following closely behind.
Adored by the crowd, the Spaniards, who were first up, excelled in difficulty and synchronization, while Ukraine impressed with spectacular throws and catches. Israel’s routine included a variety of musical nuances and the gymnasts seemed to really enjoy their dance moves. Greece sits in fourth place, the last qualifying position, with France on their heels.
Even though they finished last today, Great Britain’s Group was very pleased with their performance and Group member Francesca FOX (GBR) stated on the group’s performance:
“It was amazing, we all thoroughly enjoyed it.” On whether they are feeling the pressure to reach the qualifying standard set for them to compete at the London 2012 Olympic Games, she said:
“We never even thought about it, we just concentrated on giving the best performance we could. If we make it, it will be the first Olympic Games for all of us. In fact, we will be the first British Rhythmic Gymnastics group ever to qualify for an Olympic Games.”
The Groups will compete on three Ribbons and two Hoops tomorrow, with the sum score of both exercises counting for Olympic qualification.

Some of the world’s leading Rhythmic gymnasts turned on the style for the crowd at London’s North Greenwich Arena on Tuesday, as the Qualification rounds for Individuals and Groups concluded at the Visa International Gymnastics test event. The competition was the last chance for gymnasts to qualify for the 2012 London Olympic Games.
There were fantastic performances from the Individual gymnasts on Clubs and Ribbon today, with Daria Kondakova confirming her pole position. The Russian gymnast wowed the crowd with a display of dazzling choreographies to fast-paced music which featured a wide range of patterns and shapes.
Kazakhstan’s Anna Alyabyeva, who was in third place after yesterday’s competition, was in convincing form again with some lovely routines, including spectacular throws and catches, exact execution and well-set accents. She moved up in the ranking to qualify for the Final in second place. “I’m happy and relieved to have finished. I wanted to finish in the top five so this has been really good,” she said of her performance.”I really enjoy it when the audience supports me,” she added. “It’s very important to me.”
Ganna Rizatdinova of Ukraine finished as the competition’s highest scorer on Clubs. She began her brilliant routine with an unusual start position, her music starting slowly, then gathering pace and the crowd responded with a buzz of appreciation at the spectacle of her beautiful body movements and her strong expressiveness. Rizatdinova, who finished third, said:  “I am super happy and delighted. I was excited just to come here. It’s my first time in London and my first time trying to qualify for the Olympics. I couldn’t be happier. My best routine was the Ribbon. It was a new routine and I’d only been practising it for two or three weeks. I tripped over at the World Championships in Montpellier so I was nervous today.”
Once again theever-smiling Carolina Rodriguez delighted not only her fellow Spaniards in the grandstands with her captivating performance, the whole crowd delighting in her expressiveness and the very precise accents she set in her routine.
Chrystalleni Trikomiti of Cyprus maintained her high performance level here in London, displaying some breathtaking pirouettes and adopting well to the different tempos of her music. On Clubs she impressed with her sound apparatus handling.
Germany’s young blood, Jana Berezko-Marggrander, showed her consistency by producing two more clean routines today. She caught the eye with her beautiful pirouettes, fast and exact movements and her flexibility.

The top ten Individual gymnasts proceed to the Finals. Check out the start list!
The Groups performed their routines on three Ribbons and two Hoops today, pleasing the crowd with a show of excellent choreographies and surprising combinations.
Spain’s routine showed the highest level of difficulty, yet was superbly executed, with precise positions at each point in a beautifully choreographed performance. Alejandra Quereda said of her group’s display: “We’re very happy. We were really excited and nervous about coming here. We found the ball complicated and hard to hold but we enjoyed the hoop and ribbon because we put a lot of effort into them and we finished with our best routine.”
Spurred on by the rhythmic clapping of the spectators, Ukraine’s group displayed a wide range of throws and techniques and an overall fantastic standard of collaboration work.
Viktoriya Lenyshyn said of the Ukrainians: “We are very pleased with our performance. We enjoyed performing the Hoop and Ribbon routines because they are emotional pieces and we’ve got a good team spirit.”
Third-placed Israel’s performance stood out for a very interesting lift of one of the gymnasts, while their routine also included many risky throws of the apparatuses.
A very complex choreography was a feature of Greece’s performance. They impressed with their superb synchronisation and accuracy and Stavroula Samara was delighted with their efforts, saying: “We had a very good competition and we believe we have done enough to qualify for the London 2012 Olympic Games.”
The final ranking shows little change from yesterday’s standings, with the exception of Switzerland, who moved up into fifth place edging out France by .2 points.