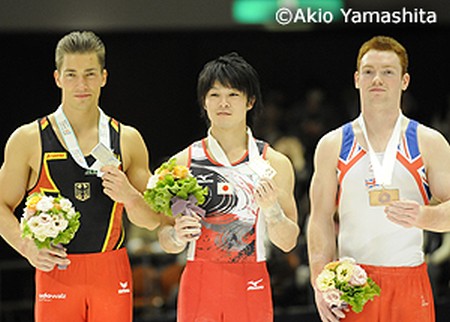 Doha (QAT), AGU Office, November 28, 2011: The 2011 Artistic Gymnastics World Cup series concluded last weekend at the Tokyo Cup in Japan’s capital with the final of four All-around competitions.
In Women’s, World Uneven Bars Bronze medallist Huang Qiushuang of China took the Tokyo World Cup title with a score of 58.265, simultaneously securing the overall series victory. After a fourth place in Jacksonville (USA) and the title in Stuttgart (GER) a fortnight ago, the 19 year old counts a total of 135 World Ranking points.
Germany’s Kim Bui, who won Bronze in Tokyo (54.398), finished second overall with 85 points and Jessica Lopez of Venezuela, absent in Tokyo, finished third of the series with 65.
Representing the host country, Yu Minobe outscored Bui at Tokyo’s Ryogoku Kokugikan arena by .301 points to take the Silver with a total of 54.699.
Detailed results

Three-times All-round World Champion Kohei Uchimura prevailed in the Men’s event, boasting a 93.565 total. He was joined on the podium by Philipp Boy (GER) in second place (90.098) and Daniel Purvis (GBR) in third (89.631).
His success in Tokyo brought Purvis the overall victory of the World Cup series this year after a suboptimal start in Jacksonville, where he finished last. Purvis’ first place in Glasgow and his two Bronze medal positions in Stuttgart and Tokyo added up to the total 130 points that put him ahead of Mykola Kuksenkov (UKR), who had to that point led the World Ranking. Kuksenkov finished fifth in Tokyo (88.964) and shares the second place overall with Boy at 115 points total.
Detailed results

The 2012 series includes a total of four All-around World Cups with stages in New York (USA), Tokyo (JPN), Stuttgart (GER) and Glasgow (GBR), and with Madison Square Garden hosting the first event on March 3 in the form of the American Cup.
Participation rights are reserved for the best eight male and the best eight female gymnasts from the All-around Finals (CII) of both the World Championships 2011 in Tokyo (JPN) and the 2012 Olympic Games.
About 2011 FIG World Cup Series in Artistic Gymnastics
With 100,000 CHF prize money at every event and guaranteed TV coverage the new FIG World Cup Series in Artistic Gymnastics is particularly attractive for the competitors as well as the public.
Composed of six events and with stopovers on three continents, the 2011 FIG World Cup competitions in Artistic Gymnastics are slated for March 5 in Jacksonville (USA), March 19 – 20 in Paris (FRA), April 16 in Glasgow (GBR), May 13 – 14 in Moscow (RUS), November 12 – 13 in Stuttgart (GER) and November 26 – 27 in Tokyo (JPN). While Paris and Moscow are hosting Individual Apparatus Finals (C III), all other World Cups feature Men’s and Women’s All-around (C II) competitions.
Separate World Ranking lists will be established for C III (6 for Men and 4 for Women) and C II competitions (Men and Women one each). For the latter, the best three results per gymnast count for the total ranking and the top scorers will be crowned the winners of the overall series. Since in 2011 only two tournaments of the CIII category will be held, the Cups will go to the top scorer of each category, adding up the results of Paris and Moscow.
Participation at C II competitions is limited to eight gymnasts while C III events feature twelve gymnasts per individual apparatus. A maximum of two gymnasts per country (and apparatus in C III) can compete and participation of the host federation is ensured by a maximum of one additional wild card per Men’s and Women’s competition if needed.
At C II events a single final round competition will be carried out with no Qualifications. At C III events the best four gymnasts per apparatus from the preliminary round qualify for the Final. 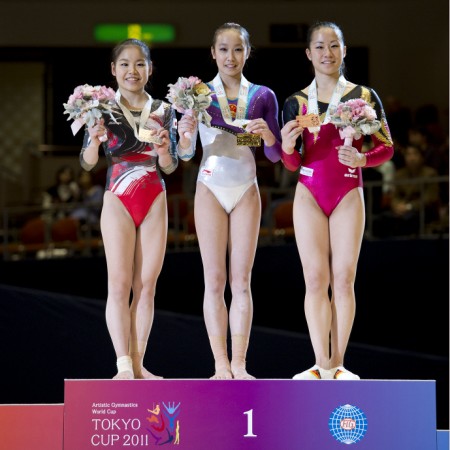