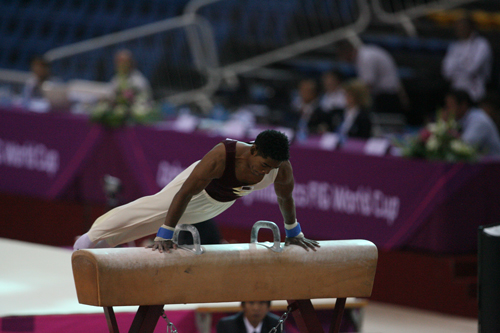 Doha (QAT), AGU office; March 20, 2011: The 2011 FIG Challenge Cup will make a second stopover in Doha (QAT) from March 30 – April 1 with a CIII competition in Men’s and Women’s Artistic Gymnastics.
Organisers of the Qatar Gymnastics Federation look forward to welcoming 80 gymnasts (55 men and 25 women) hailing from 24 different countries and representing all continents to the Aspire Academy Dome for the 4th FIG tournament held for Artistic Gymnastics in Doha.
The tournament lines up Ali Al Asi, who wrote history in 2010 when he brought home from Doha Jordan’s second Gold FIG World Cup medal. He had won the title on Rings and went down as a legend in Arab sports, having been crowed Best Arab Athlete 2010 by He Mohammad bin Rashid Al Maktoum, Governor of Dubai and Deputy of the United Arab Emirates following this victory.
Another legend crowned in Doha last year is South Africa’s Jennifer Khwela. She won the country’s first ever World Cup Gold medal in Artistic Gymnastics, taking the title on Vault. However, Khwela is not registered this year; South Africa will be represented by young Olympian Claudia Cummins and Nicole Szabo in the Women’s competition.
In Men’s, Saso Bertoncelj (SLO) is the only medallist (Pommel Horse – Bronze) from the Cottbus Challenge Cup registered in Doha. With Amr Essam Mohamed, Oliver Hegi and Ahmed Aldayani, Egypt, Switzerland and Qatar line up their 2010 Youth Olympic Games participants.
While 2008 Olympic Champion on Floor and Horizontal Bar Zou Kai of China performs on Vault in addition to his specialty apparatus, team-mate and 2010 title holder Huang Yuguo is scheduled to compete on Vault only this time around.
In Women’s, fans will get to see China’s first year seniors Yao Jinnan and Tan Sixin in the Aspire Academy Dome. The two young guns wowed the crowd in Cottbus where Yao took the titles on Uneven Bars, Beam and Floor and young Olympian Tan earned Silver on Floor.
Canada with Madeleine Gardener, Kazakhstan with Moldir Azimbay and Qatar with Shaden Wohdan also registered their 2010 YOG participants.

About 2011 FIG Challenge Cup Series in Artistic Gymnastics
Starting in 2011, the former FIG Artistic Gymnastics World Cups of the category B will run under the label “FIG Challenge Cup” and represent an open series. This year, all FIG Challenge Cups stage Individual Apparatus Finals.
Prize money of 25,000 CHF will be attributed at each event.
In 2011, FIG Challenge Cups with a maximum of two participating gymnasts per country and apparatus will take place on March 11 – 13 in Cottbus (GER), March 30 – April 1 in Doha (QAT), September 3 – 4 in Ghent (BEL), September 23 – 25 in Maribor (SLO), November 4 – 6 in Osijek (CRO) and November 18 – 19 in Ostrava (CZE).
Separate World Ranking lists will be established for C III, six for Men and four for Women. The competitions feature Qualifications and Finals, with the best eight gymnasts per apparatus from Qualifications proceeding to the final rounds. An additional one wild card per Men’s and Women’s competition is allowed in the event that the host federation fails to qualify for the Finals. 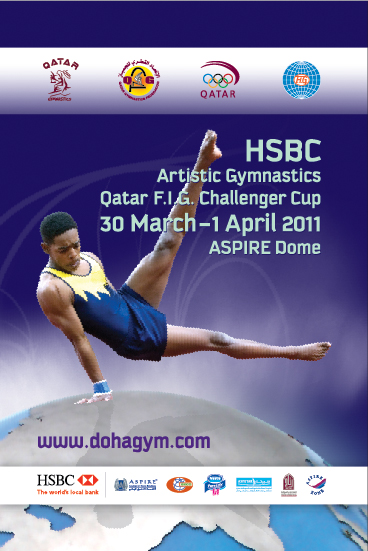