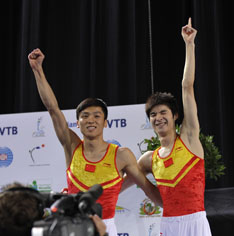 METZ (FRA), AGU Office, November 13, 2010: Tension was high in the Les Arenes when the Men’s Synchronised Trampoline finals were concluded with China taking its first World Championship Men’s Synchronised title through the pair of Xiao Tu and Dong Dong. The Chinese performed a marvellous routine, the total score of which superseded the runners-up with over two full points, leaving no contest as to where the Gold medal belonged.
The cheer almost took the roof off the hall when it became clear that France won the Silver medal, after French pair Gregoire Pennes and Sebastien Martiny performed an almost perfectly synchronised routine.
Bronze went to Tetsuya Sotomura and Masaki Ito (JPN), who experienced some instability and loss of synchronisity in the final four skills of their routine.
The Belarussian pair of Viatchaslau Modzel and Nikolai Kazak could not hold their position from the preliminaries, but dropped one position to end up just outside the medal podium.
Fifth place was taken by Portugal through the pair of Nuno Merino and Diogo Ganchinho, followed by Steven Gluckstein and Logan Dooley (USA).
Russians Mikhail Melnik and Sergei Azaryan took seventh place, having failed already after six skills, while Danish pair Peter Jensen and Daniel Praest only managed two, leaving Denmark in eighth and final place.
Final results of the Men’s Synchronized Trampoline as follows :