Doha (QAT) AGU Office, October 7, 2013: Japan and the U.S. were big winners on day one of the apparatus finals at the 44th World Championships in Antwerp, Belgium. Kenzo Shirai (shown here) and Kohei Uchimura claimed the gold and bronze, respectively on men’s floor exercise, and their Japanese compatriot Kohei Kameyama won the pommel horse title.
On women’s vault, defending world champion McKayla Maroney and new world all-around champion Simone Biles finished first and second, respectively, and American teammate Kyla Ross earned the silver medal on uneven bars.
Americans Jake Dalton and Brandon Wynn won the floor silver and rings bronze, respectively, bringing the U.S. medal total to five.
Olympic rings champion Arthur Zanetti of Brazil captured the gold on his specialty, and China’s Huang Huidan swung to the top of the uneven bars field.
Shirai dominated the men’s floor event with a 7.4 D-score (0.5 higher than the next highest D-score) that included a 3.5 twist to front-full mount and a quadruple-twisting back somersault dismount. Shirai did not do a single double somersault yet still defeated Dalton, 16.000-15.600, the largest margin of victory of the day.
With Olympic champion Krisztian Berki falling in prelims, the pommel horse title was there for the taking. Kameyama showed great stretch and Russians between the pommels to score 15.833, 0.20 clear of Great Britain’s Max Whitlock and Daniel Corral of Mexico, who tied for the silver. Whitlock used a 7.2 D-score that included a flair handstand mid-routine that flowed smoothly with the rest of the set. Corral was polished throughout his set, which began with a strong scissor to handstand.
Zanetti edged Russia’s Alexander Balandin, 15.80-15.733, although the Russian showed cleaner lines, original strength skills (pull to inverted cross mount) and one more tenth of D-score. Wynn, who stuck his full-twisting layout, finished with 15.666 to keep China’s Liu Yang out of the medals.
Women’s vault saw the redemption of Maroney, who nearly stuck her Amanar and landed her Mustafina with one step forward. Her 15.724 average was comfortably ahead of Biles (15.595), who needed only small hops after her Amanara and layout Podkopayeva. Bronze medalist Hong Un Jong, who had submitted a triple-twisting Yurchenko to the FIG for evaluation, vaulted an Amanar (off-balance landing) and Cheng Fei for an average of 15.483.
Giulia Steingruber of Switzerland vaulted an excellent rudi and Yurchenko-double twist for fourth, but veteran Oksana Chusovitina, fifth, landed low on her rudi and out of control on her Tsukahara-1.5.
China’s Yao Jinnan was first up and first down on uneven bars, when she peeled off on her Mo Salto. But Huang followed with the strongest routine and cleanest lines. She performed a beautiful Pak to immediate Stalder-Shaposnikova-half and stuck her tucked half-in half-out dismount. Ross was second with strong inside-Stalder work but she had form breaks on her Shaposhnikova and Shaposhnikova-half (15.266). Olympic bars champion Aliya Mustafina of Russia was third with 15.033, showing a Shaposhnikova-full but missed a planned connected and landed awkwardly on her namesake dismount. 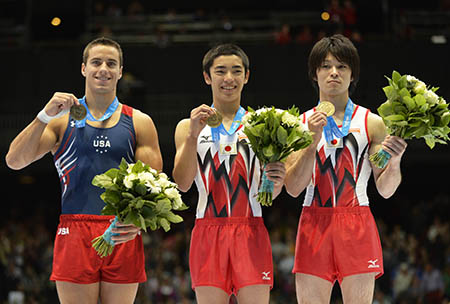 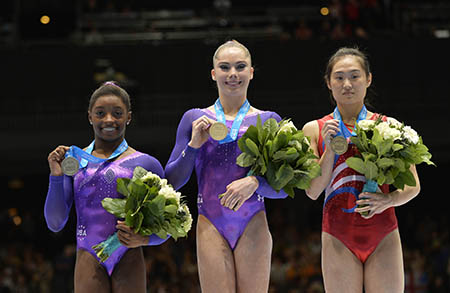 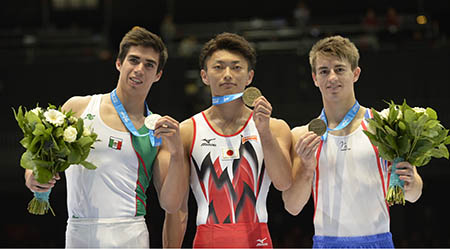 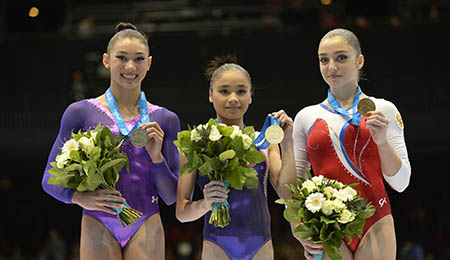 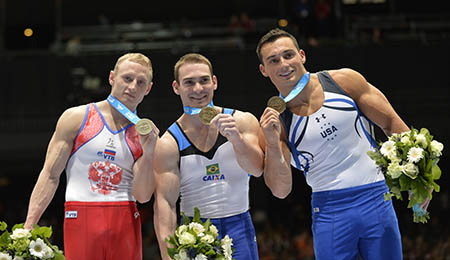