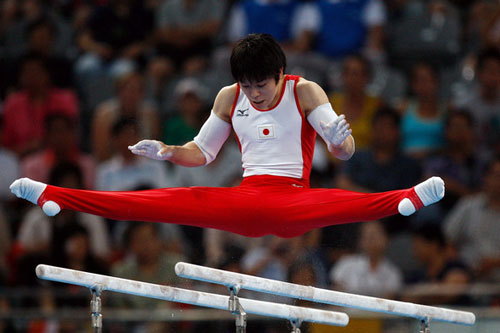 The Olympic Review continues its countdown to the 2012 Olympic Games in London by speaking to stars. Following silver medals in both the all-around and team events in Beijing in 2008, three-time all-around gymnastics world champion Kohei Uchimura is targeting gold in London, although his priority is team success with Japan.

What were your experiences of the Olympic Games in Beijing in 2008?
I learned two things: if we don’t give up, our dream will come true, and the result is not everything.
As one of the favourites to win the individual all-around title at the London 2012 Olympic Games, how are you approaching your training this year?
My priority really is the team victory. My focus is not on the all-around title at all.

What do you think of London as a city?
I think that London has very beautiful and historic streets. Big Ben also made quite an impression on me when I saw it.

When the London 2012 Olympic Games are over, do you think you will continue to Rio 2016?
I haven’t yet won the team title at a Gymnastics World Championships, so I will first focus on that goal. I’m not thinking about the Games in Rio in 2016 at the moment.

How did you get started in gymnastics?
I started gymnastics when I was three years old, at my father’s gym in Nagasaki. I enjoyed doing saltos and twists on the trampoline.

What does your usual training regime consist of?
Normally I train twice a day. Thursday and Sunday are my rest days and I usually just relax.

Who were your Olympic heroes when you were younger?
My sporting heroes were Naoya Tsukahara from Japan and Alexei Nemov from Russia. They were both top gymnasts at that time. In fact, when I was 15, I left my family to train at a gym in Tokyo where I trained with Naoya Tsukahara. I had a great time.