Teenage rhythmic gymnast Son Yeon-jae dreams of becoming the Kim Yu-na of her discipline. Son took a huge leap towards realizing that dream when she finished 12th in the all-round individual section with 98.45 points at the Federation Internationale de Gymnastique Rhythmic Gymnastics World Cup in Kalamata, Greece, which ended on March 28.
It was Son’s first competition on the senior circuit. Experts said she has great potential to become a world class gymnast given that she achieved the result in her senior debut competing against the world’s top-ranked gymnasts from Russia and Belarus.
Son has said she wants to become a second Kim Yu-na and is studying every detail of her movement, from tiny hand gestures to facial expressions. Son grew 3 cm last year and now stands as tall as Kim at 164 cm.
Like Kim, who started figure skating at the age of seven and had been seen as a prodigy ever since, Son started rhythmic gymnastics at five and was selected to the reserve of the national team at 13. Since then, she has swept just about every competition in Korea. She is an equally hard worker with tremendous natural talent.
Son practices at least eight hours after she finishes morning classes at school. During vacations, She practices for more than 12 hours morning and night. “I am only satisfied when I feel I’ve done enough training. When I think of rhythmic gymnastics as part of myself, I no longer feel tired,” she says.
“Figure skating used to be unpopular in Korea, just as rhythmic gymnastics is now. But now figure skating has blossomed thanks to Kim, and I want to do for rhythmic gymnastics here what she did for figure skating.” Son’s mind is already on the 2012 London Olympics.
Rhythmic gymnastics hopeful Son Yeon-jae finished 11th out of 54 competitors in the International Federation of Gymnastics’ Tournoi International de Corbeil-Essonnes near Paris on Sunday.
Son performed well in all four categories to earn a combined score of 102.400 points, with 25.400 points in the rope, 25.425 in the hoops, 25.950 in the ball and 25.625 in the ribbon. She finished 11.05 points behind first place Daria Kondakova (113.450 points), and failed to achieve her goal of placing in the top 10. However, the result is not bad at all considering it was Son’s second competition in the senior circuit. 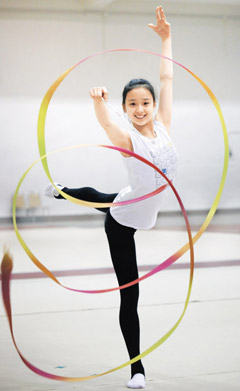