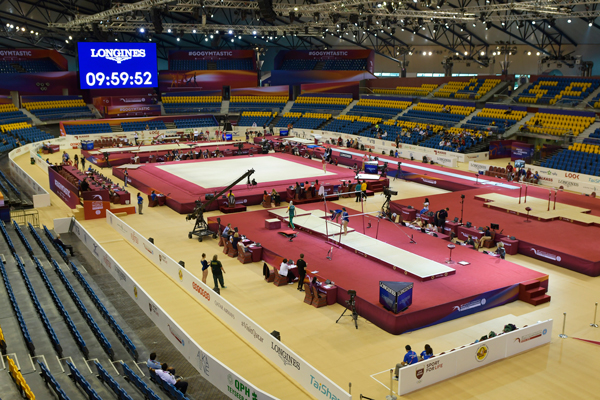 DOHA: Following the huge success of the 48th FIG ART World Championships in October last year, Doha is once again geared up to host the annual 12th FIG ART Individual Apparatus World Cup.
The four-day event, which starts on March 20 at the gigantic Aspire Dome, will feature a total of 128 MAG and 60 WAG gymnasts from 57 countries.
“The past tournaments have helped us in a big way to understand the intricacies involved in hosting a major event. We’re confident to deliver the best,” said Qatar Gymnastics Federation President Ali Ahmed Al Hitmi.
This year’s edition attains huge importance as the gymnasts will not only eye for medals, but will also vie for berths that are on offer for the 2020 Tokyo Olympic Games.
2020 Olympic Games qualification up for grabs in Doha
The Olympic Qualification Ranking list will be established after the last competition of the 2018-2019 & 2019-2020 World Cup Series.
According to the Article 18 of Olympic Qualifications, the top-ranked gymnast on each apparatus at the end of the 2018-2019 & 2019-2020 series have the opportunity to qualify for the 2020 Olympic Games. This place is nominative.
However, gymnasts, who were part of a team which qualified at the 2018 or 2019 FIG World Championships may participate but may not earn an additional quota place.
The qualification pathway for the next year’s Olympic Games was significantly overhauled and modified since 2016. The men’s and women’s team events in ART gymnastics were reduced from five members per team to four while further allocations were available for up to two specialists.
The assignment of World Cup points for each competition will be the base to establish the Olympic Qualification Ranking list. However, competitors who were part of a team which qualified at the 2018 or 2019 FIG World Championships, will be deleted from the list of each competition and the number of points earned will be assigned to the next eligible gymnast.
Xiao, Zou, Epke top attractions
Several top MAG gymnasts and world champions like Xiao Ruoteng (CHN), Zou Jingyuan (CHN) and Epke Zonderland (NED) will try their luck to seal an Olympic berth besides picking up medals.
Among the youngsters Carlos Edriel Yulo (PHI), who became his country’s first medal-winner in a World Championships here, will be the cynosure of all eyes. The talented Filipino took the floor honours with a score of 14.566 at the Melbourne edition.
Lee Chih-kai of the Chinese Taipei, who won the bronze in pommel horse here at the Worlds, can also uncork a surprise after his triumph in the same apparatus with 15.266 points last month.
Meanwhile, Romania’s 38-year-old Marian Dragulescu will also be back to compete with a younger generation of athletes.
Ahmed Al Dayani, Ahmed Mosa and Raslan Saoud, who will make his debut as a senior in a major competition, will add the local flavour.
Ferhat Arican, who became the first Turkish male gymnast after 108 years to compete at the 2016 Rio Olympics, will also hope to pick up a medal on parallel bar.
Oksana aims for record eighth Olympic appearance
World’s oldest Olympian Oksana Chusovitina (UZB), who is targeting her record eighth appearance at the Games, will also be competing in Doha.
The 43-year-old is still in her pink of health and she will hope to achieve her dream in the Qatari capital by becoming the only gymnast to have made consecutive appearance since her debut in 1992 in Barcelona (ESP).
One can gauge her commitment and form from her recent success which included a silver in the vault at the Melbourne leg of FIG Individual Apparatus World Cup last month. Oksana lost to South Korea’s Yeo Seo-jeong in a repeat of last year’s Asian Games vault final in Jakarta (INA), but Yeo’s total was just 0.066 higher than this ‘mother of one’.
China will field a five-member team that also includes Yu Linmin, who finished third behind Oksana in Melbourne.
Double world champion Fan Yilin added to her growing list of international medals when she won the uneven bars title final, also in Melbourne.
Tang Xijing, Li Qi and Zhao Shiting while Japan will come here with some young gymnasts like Ayaka Sakaguchi, Soyoka Hanawa and Yumika Nakamura.