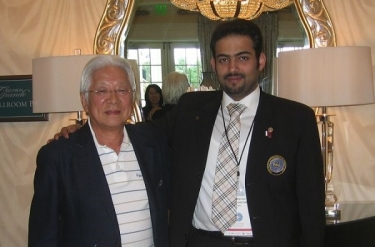 The former President of the Asian Gymnastics Union (AGU), Japan Gymnastics Association (JGA) and member of the FIG Foundation for Solidarity Hidenori Futagi died on 10 August 2022, aged 85.
From April 2001 to June 2021, he was the President of the JGA, overseeing a period marked by relentless success on the world stage in Artistic Gymnastics, most notably with the domination of Kohei Uchimura in the Men’s All-Around for eight consecutive years.
During his term, Japan staged several major Gymnastics events that were always very successful, including the 6th Senior ART Gymnastics Asian Championships in Hiroshima in 2015 and the 2011 Artistic Gymnastics World Championships seven months after the Fukushima nuclear disaster on the north-eastern coast of Japan.
Mr. A-Rahman Al-Shathri who succeeded Mr. Hidenori Futagi as President of AGU in 2007 paid tribute to his mentor: ‘’I am sorry for your loss. Futagi was a wonderful person, we worked together for many years to develop gymnastics in the whole Asia. He will always be in our hearts, and we will never forget the time we spent together’’