History-maker Rifda wants to do well in World Championships 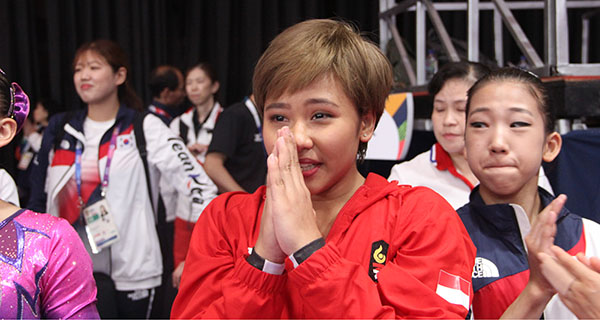 JAKARTA, Indonesia: Indonesia women’s team coach Eva Butarbutar was on cloud nine after the host won their maiden medals in gymnastics, silver and bronze, at the Asian Games on the last day on Friday.

Before her protégé Rifda Irfanaluthfi became the first Indonesian women to win a medal at the continental competition, Agus Adi Prayoko made history by winning a bronze in the men’s vault.

But the biggest cheer was reserved for Rifda (12.750), who outplayed Japan’s Shiho Nakaji (12.600) in the women’s floor exercise to win a silver medal.

North Korea’s Kim Su-Jong won the gold with an impressive 13.025.

“I don’t have words to express my feelings. I’m proud of being an Indonesian. It’s the best gift for myself too,” said Rifda, who had spent a week-long training camp in Doha, Qatar, before the Games.

It was quite an achievement by the 19-year-old considering the fact the field had China’s most successful gymnast Chen Yile, who, however, finished fifth.

“Rifda is a quick learner and she works really hard on her exercises to achieve something, but she wants to do well at the World Championships in Doha,” said coach Eva, who first trained her in 2010.

A moment after Rifda’s score was flashed on the giant digital screen, the Indonesian fans broke into a huge roar. It was one of the most spectacular scenes which made everyone emotional including her team-mates as the Indonesian Gymnastics Federation officials
hugged each other.

The World Championships will be a different field with several top stars will be vying for honours. Though it’s difficult to expect a medal from Rifda, a chance to compete with the best will surely improve her skills and confidence.

History-maker Rifda wants to do well in World Championships