I want to be an Olympian: Misha 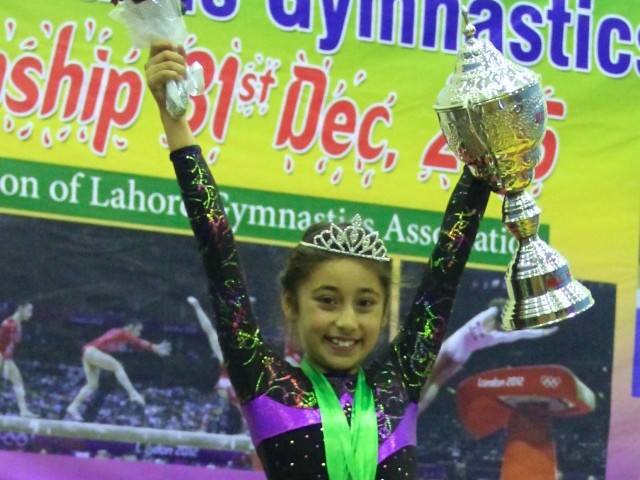 AGU Media Office: At her age, when most girls spend their time with Barbie dolls, Pakistan’s 10-year-old Misha Saqib does some incredible vaults, twists and turns on a gymnasium floor.
An ardent admirer of Olympic champion Simone Biles, Misha recently won five gold medals at the National Women’s Championships in vault, balance beam, floor and also added the best gymnast and team gold.
She is passionate about the sport and dreams to be at the Olympics.
“I want to be like Biles. I train six times a week after school. I want to be an Olympian,” said Misha.
She was introduced to the sport through a local coach at her neighbourhood in 2013. However, she travels to Dubai twice a year and she receives trainings.
“We took her to London for a short course. Misha did some ballet for a year. We think she has potential and hence decided to encourage her,” said her mother Zantiana.
Meanwhile, while praising Misha’s efforts the Pakistan Gymnastics Federation (PGF) President Ahmed Ali Rajput laments the sport is still not taken up seriously.
“We’re trying to develop the sport. We need to work really hard and have excellent infrastructure to produce world-class gymnasts,” said Rajput.
While South-East countries like China, Japan and South Korea have a strong presence at the world level, the sport in south Asian nations still needs a lot of attention.
India’s Dipa Karmakar’s achievement at the Rio Games have shown there’s immense talent, but the respective federations in Bangladesh, Sri Lanka, Pakistan, Nepal and Bhutan must accumulate strength to develop the sport and encourage young gymnasts like Misha.

I want to be an Olympian: Misha